The Most Vibrant Dominica Carnival Costumes 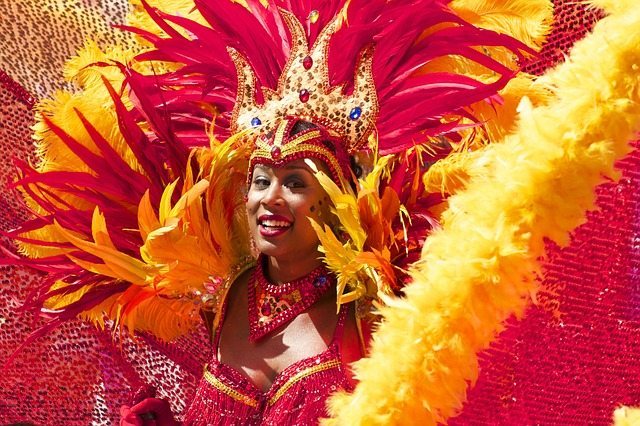 Carnival is a festival that has fascinated me for years. Although I’m not a huge fan of crowds, I’ve always wanted to participate in one and this year, I got the chance. While Rio de Janeiro is perhaps the most well-known Carnival around the world, there are plenty of other destinations just as noteworthy and Dominica is definitely one of them.

There are a few different events that lead up to the two day festival (this year it was March 3rd and 4th) and I was glad to have a few days to explore the island before diving full-force into Carnival madness. Unfortunately I missed the Miss Dominica Carnival Queen Pageant due to a flight delay, but I heard that it was quite the spectacle. The pageant features seven lovely ladies from different parts of Dominica and unlike competitions in the US, each contestant competes in every category like swimsuit, evening-wear and the final question and answer round. The best part? The winner doesn’t take home cash – instead, their college education is paid for in full. This year, it was Francine Tiffany Baron, 20, of Grand Bay who took home the coveted crown. Each woman marches in the Carnival parade a few days later, so I was able to see them after all.

There’s also a Calypso Monarch Show the Saturday before Carnival, which I was able to attend. The show is much more informal than the pageant but hugely popular, with tents near the entrance for purchasing beer and souvenirs. We showed up around 8:30pm and the venue was nearly packed. Since there are so many rounds, the music usually lasts through the night, at least until 2am in the morning. It was fun to spend a few hours dancing along to the music, even though many of the themes and lyrics went over my head. I especially liked seeing all the costumes, as many of them were shimmery and/or extremely detailed.

Once Tuesday rolled around I was ready for the famous Carnival parade. I arrived around 11:30am and since I was with a local, we timed it perfectly. What was so great about celebrating Carnival here, rather than in Rio or someplace else, is that I could get right up to the outfits. Sure, there were many people watching along but it didn’t feel overwhelming to be a spectator. The parade takes place in Roseau and participants basically go in a circle for several hours before stopping for lunch. I seriously admire their endurance. For me, the most exciting costumes were those worn by the pageant contestants and the group that walked for hours on end in stilts. There were also a few people dressed in more traditional garb. 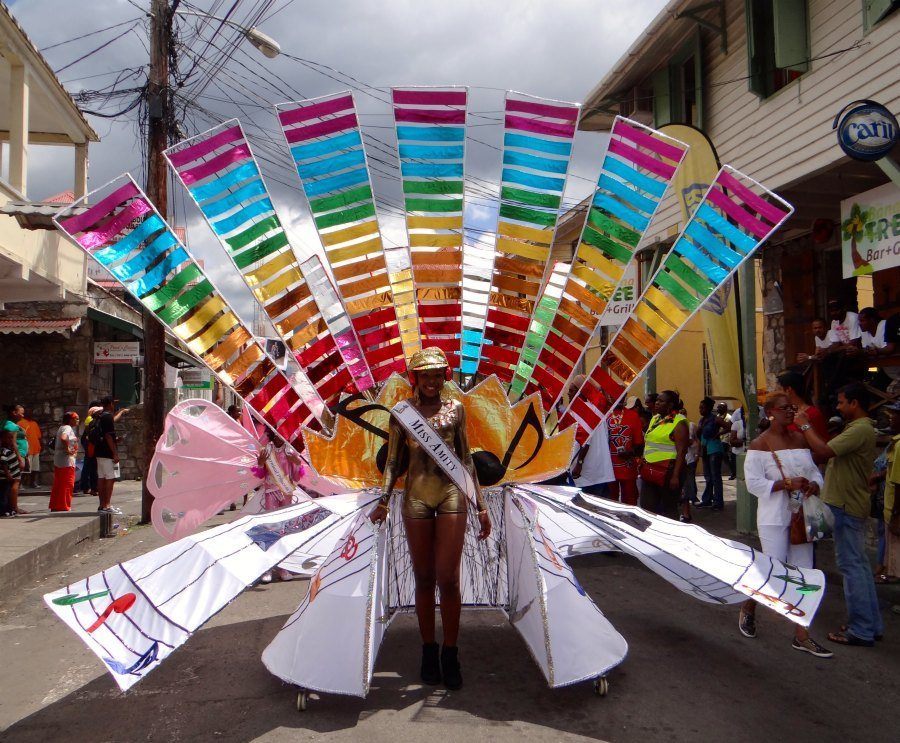 This lady made me think of Tiana from Disney’s The Princess and the Frog. She just exuded elegance and her fun attitude really resonated with the crowd. 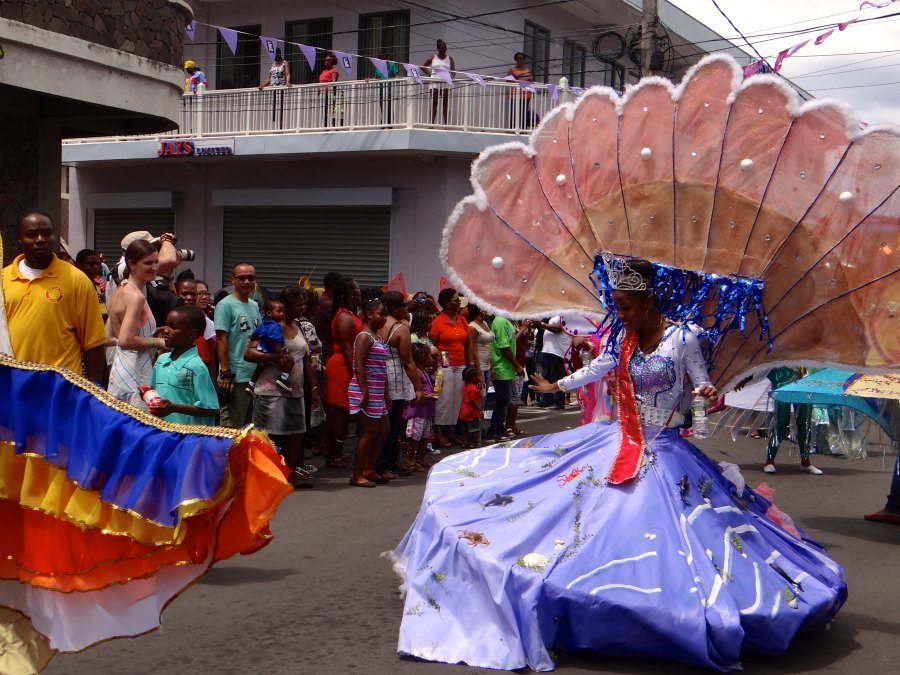 These two woman didn’t march side by side but I just adored their costumes, for different reasons obviously. 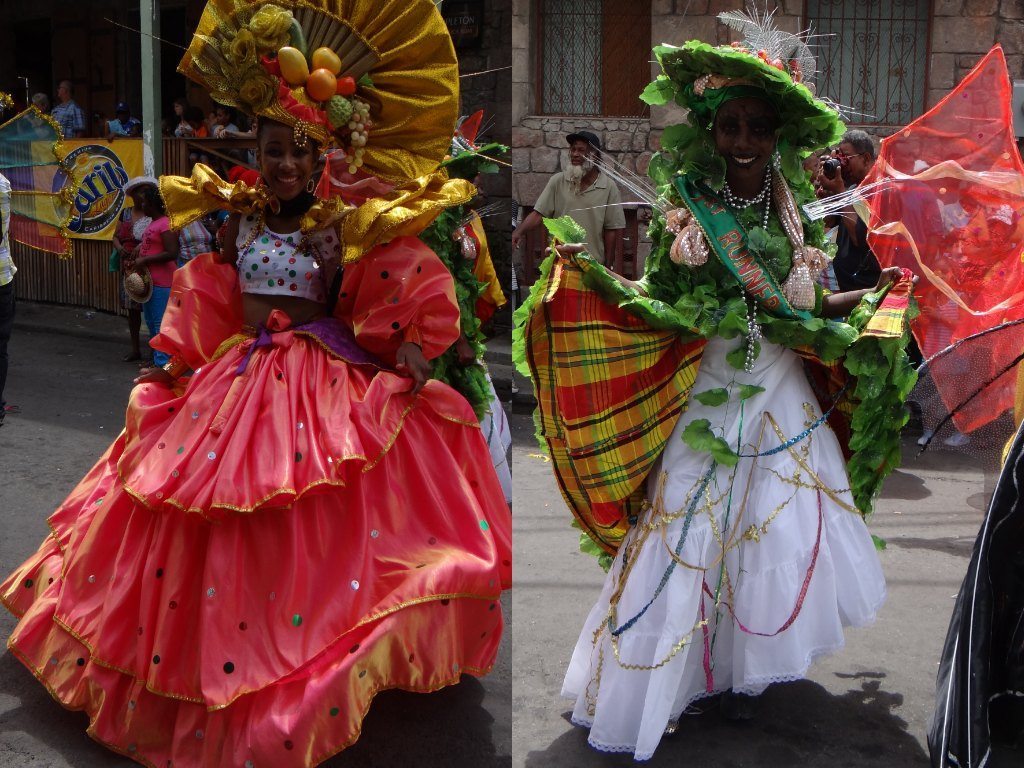 This is probably my favorite photo from the whole day. This group of about thirty or so people marched on stilts. Talk about talent! 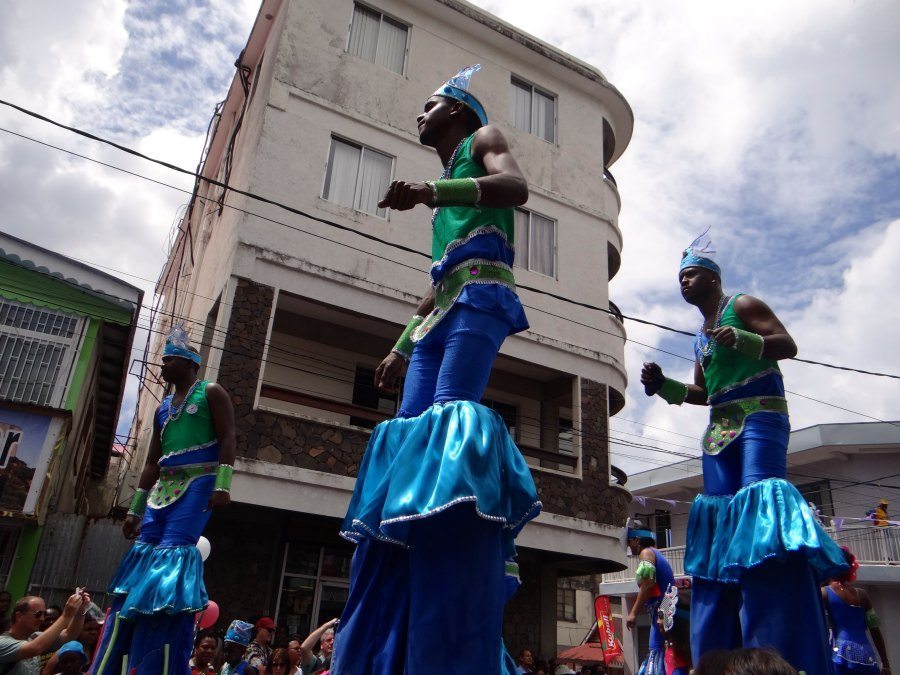 In case you wanted to see what the female outfits looked like, here are two closeups. The girl on the left needs to teach me some dance classes. She sure knows how to move! 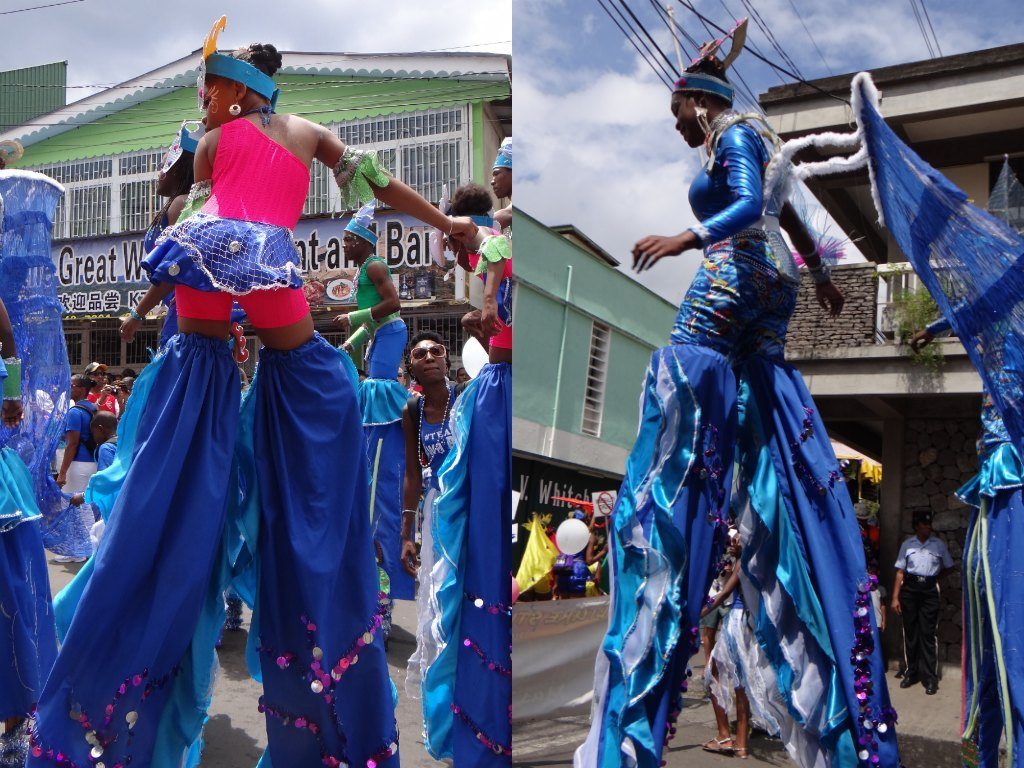 Here’s another shot of the parade and a great example of the bright colors used in many of the costumes. 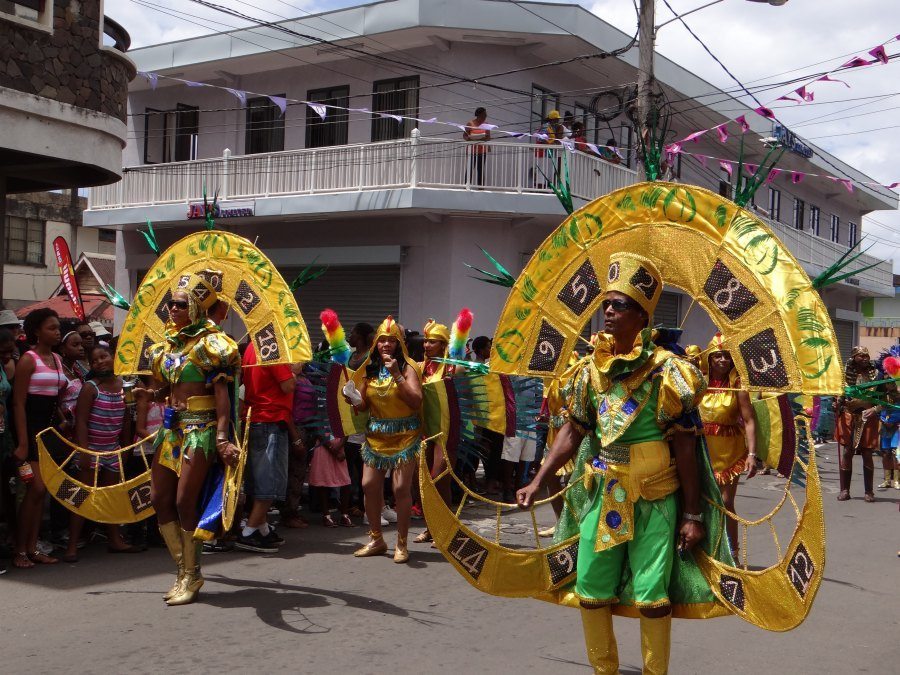 Of course I can’t leave out the little ladies who looked just as fabulous as their older counterparts. 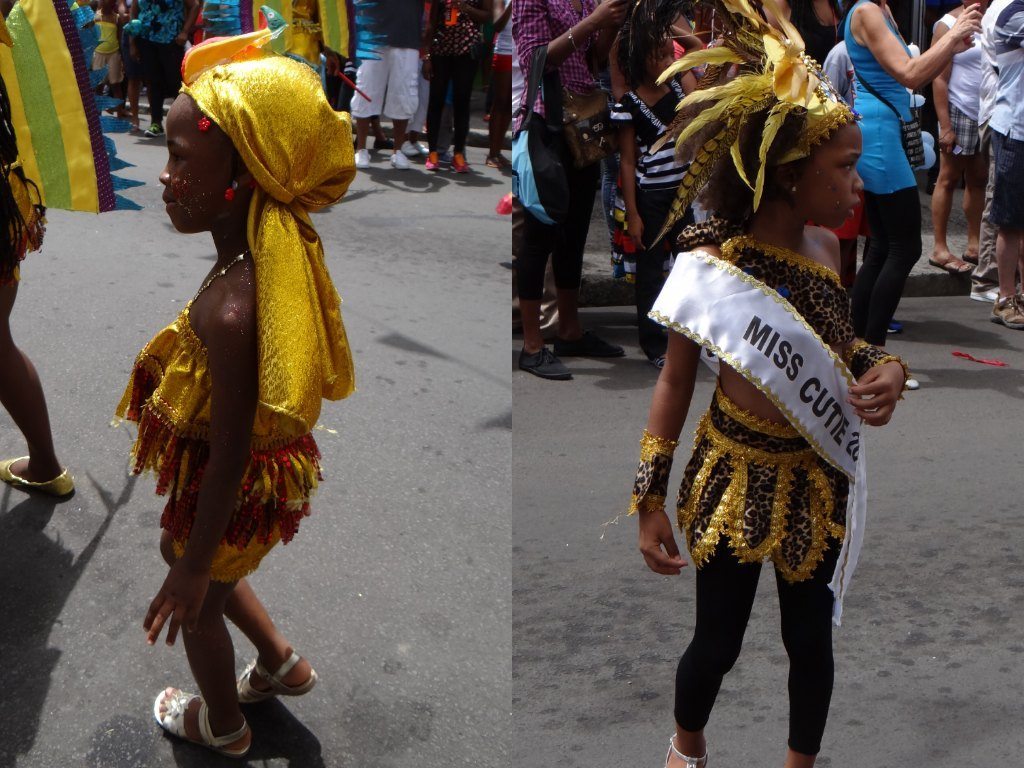 This was the most thrilling portion of the parade, and clearly the most eccentric. 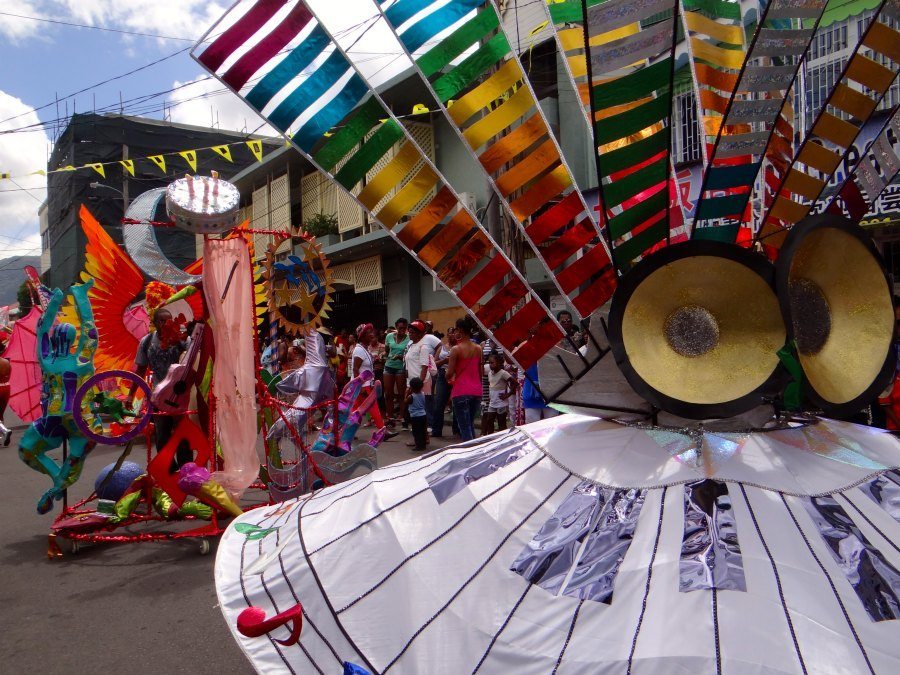 What was the most memorable festival you’ve ever attended? Tell me in the comments below!