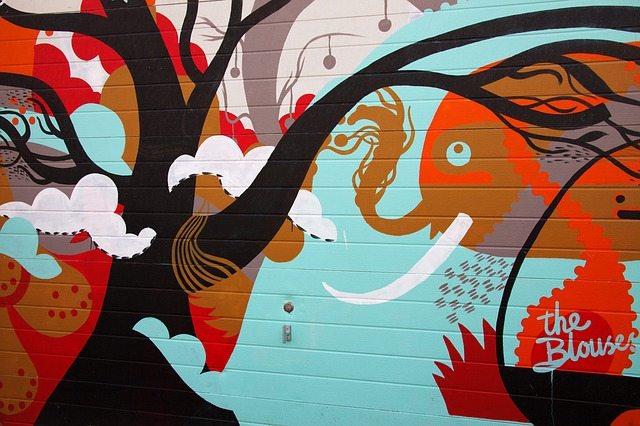 This is a guest post by Aline Mayard of YallaBye.eu.

Beirut was such a beautiful, cosmopolitan, and vibrant city in the 50’s and 60’s that it was known as the Paris of the Middle East. But the country was stroke by a civil war from 1975 to 1990 leaving the city in ruins.

Ever since the 90s, the people of Lebanon have been rebuilding Beirut (without any urbanism plan). High-end towers and trendy buildings have been emerging everywhere, cohabitating with grace and mystery with abandoned buildings riddled with bullet holes.

The capital of Lebanon is now again world-renown for its parties, its designers, and its atmosphere. Beirut was named the top place to visit by The New York Times in 2009, and as one of the ten liveliest cities in the world by Lonely Planet in the same year.

It’s not hard to see why. The city vibrates; you can feel the optimism and “joie de vivre” in the streets. Just have a look at the walls! Ever since 2006, hopeful graffitis started flooding the city.

The political graffitis have been progressively replaced with classic tags, who themselves have been replaced with more elaborate graffitis. Now, you can spot massive paintings occupying whole walls of buildings, like in Hamra, or graffitis making their ways into hotels and bars, like in Coop d’Etat. 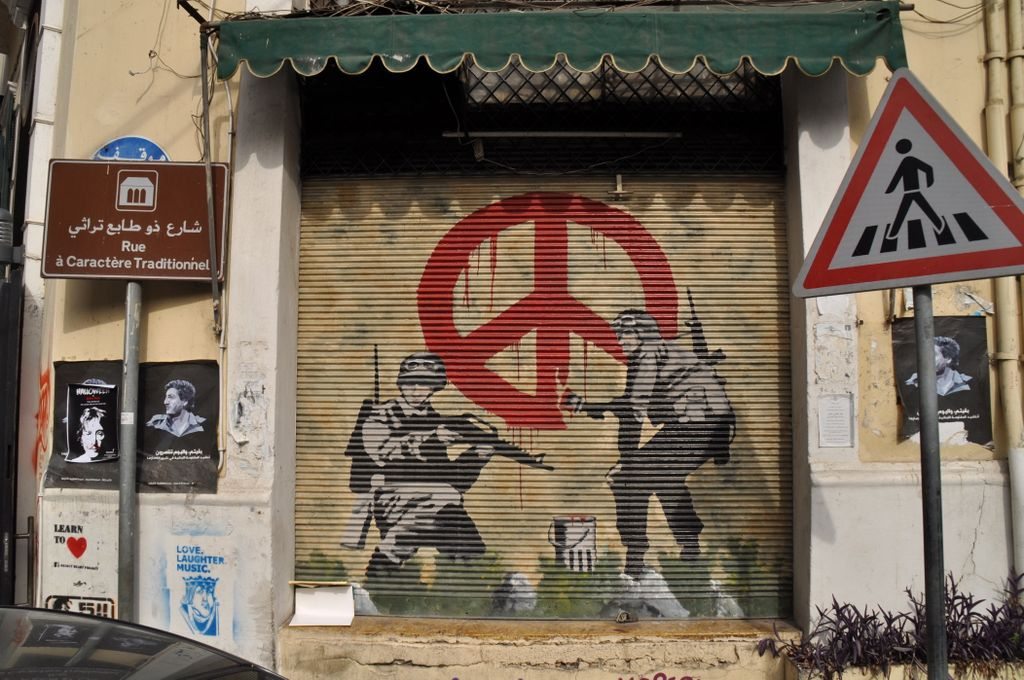 Beirut is the scene of a more unusual kind of graffitis. People, be them street-artist or regular have decided to participate in the reconstruction of the city by adding colors and joy.

Dihzahyners, a relatively new street art collective, was founded last April after Jubran Elias, 24, saw a picture of stairs in Germany with each step painted in one color. With Lana and Carine, he decided to create an event on Facebook to invite their design graduates friends. To their surprise, 12 people showed up.

“After painting the stairs, we had to block them to let them dry. But no one [the neighbors] was pissed. On the contrary, they loved it. Colors make the stairs easier and funnier to climb” explains Jubran.  “The neighbors watched us, and came to thank us. An old lady even asked if she could help” he adds. Now, they can be up to 50 people to paint stairs: designers, friends, neighbors… “Our collective is open to everyone.” concludes Jubran.

For Jubran, the success of those installations is easy to understand: “Beirut needs light, color. People want to be brought together”.

Starting with the same observation, Dispatch Beirut decided to launch another “social installation”. This collective clusters Lego pieces between the many walls’ cracks that you can find throughout the city.

What Beirut taught me also is that you don’t have to be an artist to gather people around art, to create hope in a neighborhood, to bring colors in people’s life. Last time, I was walking in a residential area when I walked upon Beirut Colours’ team painting an abandoned wall in Rmeil, Achrafieh. Their objective is not really to make art but rather to “rebuild Lebanon with colors” as Patrick Abdelsater put it. This volunteer team get interested in a neighborhood and try to find what’s missing. From there, Beirut Colours put some color in the neighborhood! 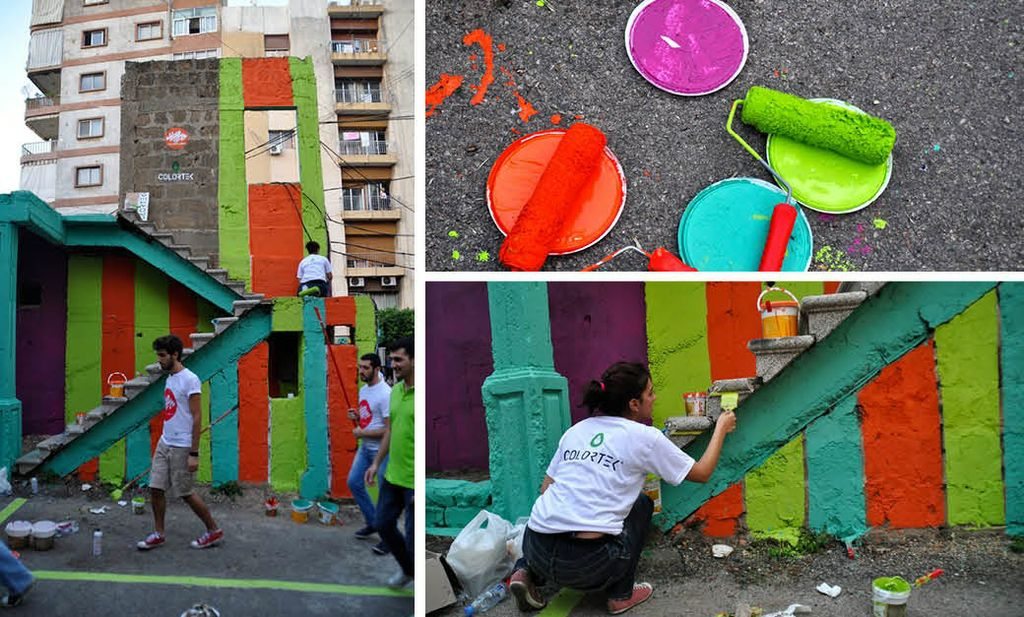 Graffitis are getting so big that museums are starting to pay attention to them. Las fall, Beirut Art Center, a gallery stuck between two highways, organized the White Wall exhibits. An exhibit that played with the very nature of graffitis. No way they were going to turn graffitis into traditional works of art. Here, artists from around the world came to express themselves on the walls erected for the previous exhibit, but also outside the hangar which welcomes the showroom and throughout the city. The inside graffitis will be repainted at the end of this two months exhibit, respecting the street-art philosophy. 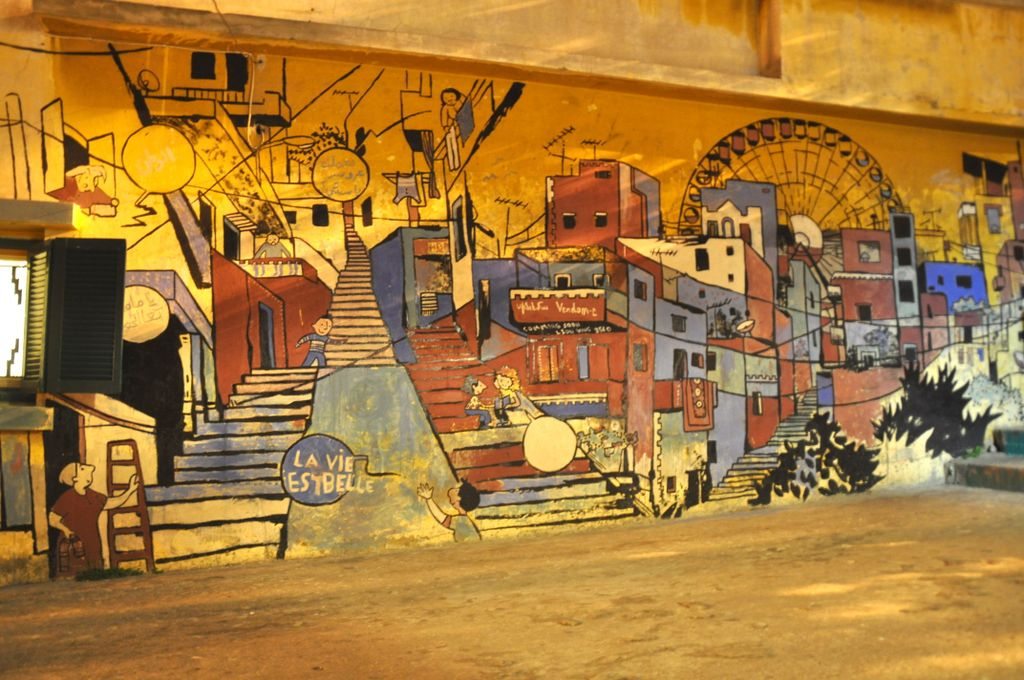 Aline Mayard is doing a tour of the Middle-East and is sharing her experiences in this mysterious region on YallaBye.eu.  She talks about travel and tourism, but also society, design, startups, culture, traditions, parties etc. She loves to travel, understand new cultures, and seeing how startups can change our life.