Learning the Story of Hong Kong with Urban Adventures After my first week of touring Hong Kong like a boss, it was time to slow things down and actually get to know Hong Kong on a deeper level. When Urban Adventures approached me to participate on one of their most popular and longest running tours: The Story of Hong Kong, it was kind of serendipitous because I was already planning on signing up for one of their neighborhood walks anyway. This was my first Urban Adventure tour but I’ve heard about them for years, as their known for leading art-related walking tours that explore a city’s street art culture, architecture and other aspects of both old and newly revamped neighborhoods.

The tour lasted three hours and we covered quite a lot of ground, starting in the trendy yet traditional Sheung Wan neighborhood and ending in super modern Admiralty area. I’ve decided to include five of my favorite highlights below. For more Urban Adventure tour offerings in Hong Kong and elsewhere, check out their site.

The History Behind Hollywood Road

My apartment is located in Central, just on the edge of Soho and nearly every day I walk across the bustling Hollywood Road. I assumed that maybe because Hollywood Road ran though the Soho neighborhood, that it was some sort of ode to Hollywood, Los Angeles but I was sorely mistaken. Hollywood Road was the first British road completed after they came here and took power, which of course, preceded Hollywood movies. As it turns out, the road, which was completed in 1844, is named after the holly trees that grew in the area. Along this eclectic road are hundreds of Chinese antique dealerships as well as small cafes, fusion restaurants, art galleries and the Man Mo Temple. Pictured below is Hollywood Road Park, nestled just off the main road and serving as a quiet retrieve from urban life. Back in my junior year of high school, I took a class called “World Religions” and I remember briefly learning about Taoism and being utterly fascinated by it. That was a decade ago though, so I needed a refresher course and the MAn Mo Temple along Hollywood Road was the perfect site to brush up on Taoism. As my guide Danny explained, Taoism is a religion that has stayed within China and consists of rituals where you try to protect and perhaps even change your future for the better. In this case, “Man” refers to literature and “Mo” to martial arts, so many worshipers come here with prayers relating to either knowledge or action. The temple was completed in 1847 and is a declared monument in Hong Kong and protected by law. Entrance is free and donations require a small fee. 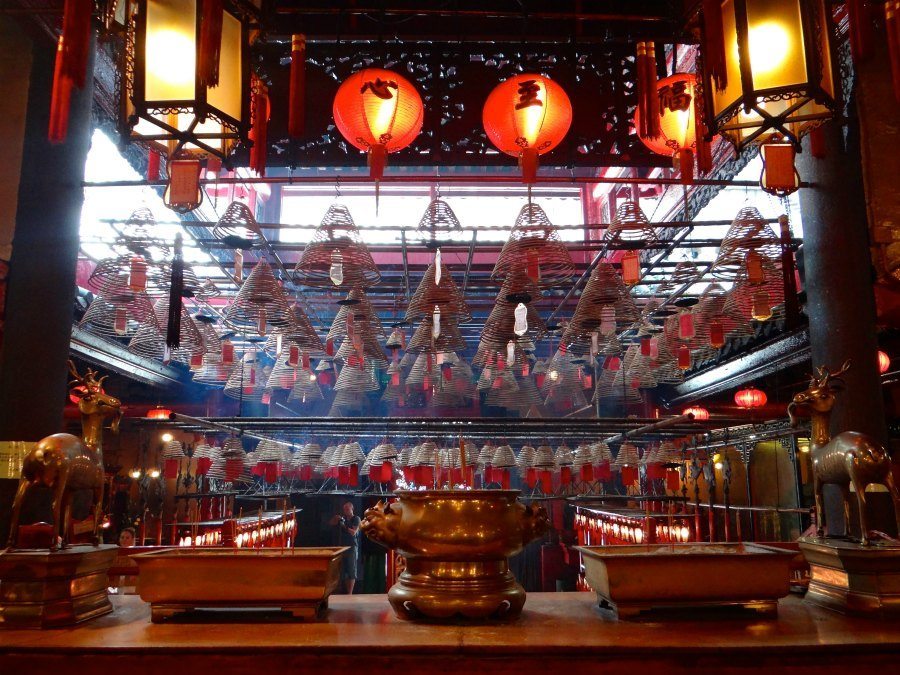 Streets with A Story

Having walked by many of the streets covered on this tour already, it was fascinating to learn the backstory behind some of them. Truthfully, if I hadn’t taken this tour, I doubt I ever would have noticed the significance of each. Below on the left is Pottinger Street, otherwise referred to as the “Stone Slab Street” by locals. There are few streets like this in Hong Kong anymore and after glancing at the tiny stone steps, I definitely understand the nickname. Pottinger Street is named after Harry Pottinger, the first governor of Hong Kong. On the right is Duddell Street, also in Central, and named after George and Frederick Duddell. These are the only four original and remaining gas lamps (two at the bottom and two at the top) left on a colonial staircase and therefore, it is a declared monument of Hong Kong. I’ve passed by this somewhat hidden park countless times on the way to my apartment and never though much of it. I was wrong, terribly wrong. This was one of my favorite highlights from the tour and for good reason. The park features a statue of a man dressed in modern attire cutting off the hair of another whose garb is more traditional. Symbolizing the “out with the old, in with the new” mentality, the monument celebrates the end of the Quin dynasty in 1911 and the beginning of the republic in 1912. I also learned that because this park is so hidden and connected by small alleyways, this was the spot where the revolutionaries, including Chinese revolutionary leader Dr. Sun Yat-sen. Apparently, he was a bit like a cat in that he escaped every time the opposition tried (and failed) to kill him. It’s safe to say that Hong Kong Park is my new favorite place. And yet, this park wasn’t always here. In fact, all of Hong Kong’s major parks are built on former military barracks. I can’t even imagine what the city looked like then but I’m glad that the city has made so much progress in terms of urban planning. Even the Flagstaff House Museum of Tea Ware, located within the park, used to be the office and residents of the commander in chief of the British Military in Hong Kong. Completed in 1846, it is also the oldest Western building in Hong Kong. The park itself is a great place to sit back and relax. There are fountains, lily ponds, a restaurant and even a marriage registry. We passed by a bride taking photos in front front of a waterfall. Surrounded by towering skyscrapers, it’s the ultimate city break. This trip was comped by the Urban Adventures in partnership with Intrepid Travel. All opinions are my own. Also worth noting that this 3-hour tour is only $49 USD and I would have gladly paid.