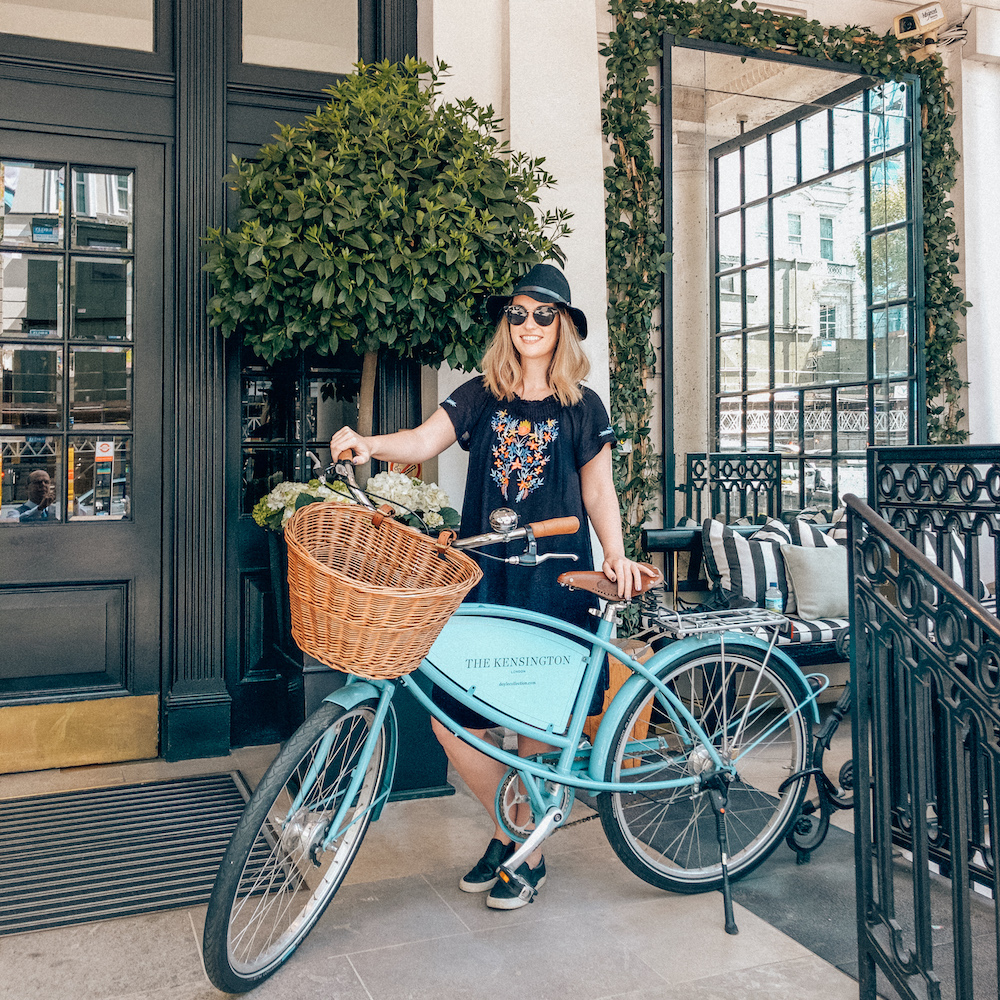 The Royal wedding of the (now) Duke and Duchess of Sussex may be behind us, but I personally will never forget what a beautiful ceremony it was from start to finish…at least, from what I could tell having watched the nuptials from my laptop screen.

Even though I’m not a royal in real life, I did get the chance to feel like one earlier this month. I teamed up with Love Great Britain and Visit California to take me from my home in Cali to my former home in London to live it up like a real royal would. 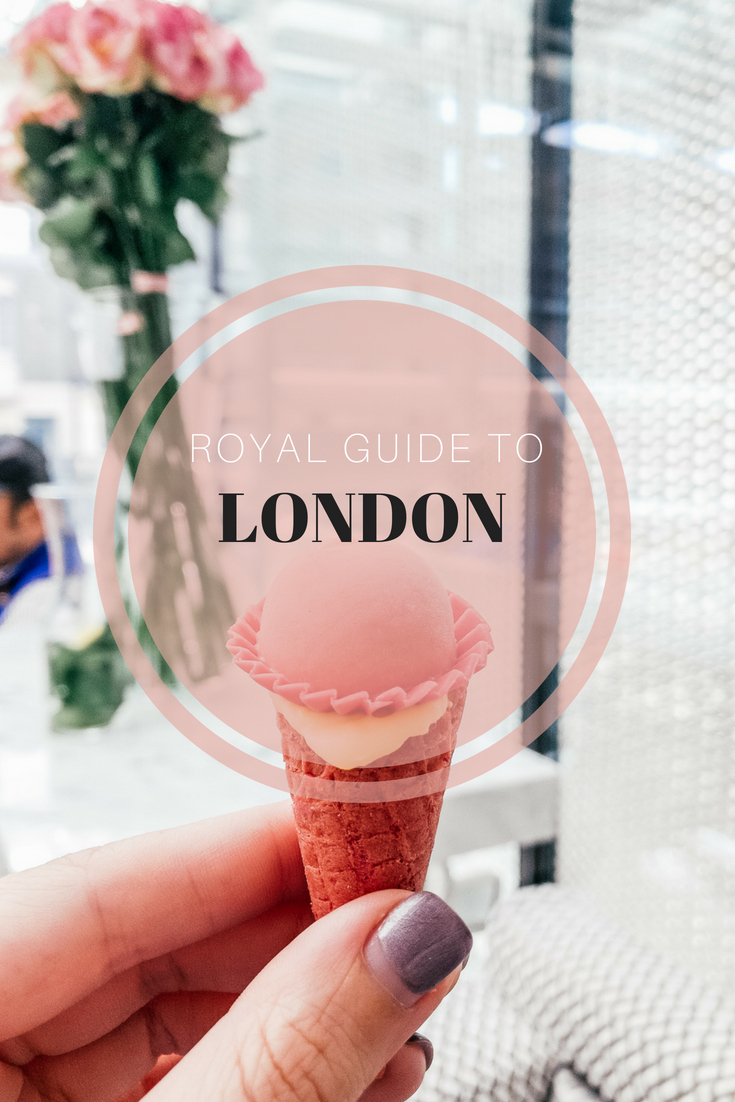 If you’ve been following me for years, you’ll know that I very rarely fly anything other than economy. So, when I got upgraded from Premium Economy on Air New Zealand‘s flight from LAX to LHR, I was beyond thrilled. Truth be told, I’ve heard really great things about Premium Economy, with BravoTV describing it more like Business Lite.

From start to finish, the flight experience was easily on of the best I’ve had. I spent an hour or two at the lounge before boarding the flight and settling into my seat. The flight attendants were so friendly, kind and helpful throughout the flight. I might usually be a pauper in economy but on this trip to London, I was definitely a queen.

In Business Class there were two features that really stood out to me. The first is that the footrest doubles as a seat for those traveling together. So, instead of enjoying your dinner from the comfort of your seat, you can actually dine across from your special someone in the little seat. Second, when it’s time for bed, the attendants actually convert the seat into a bed, rather than simply reclining it like most airlines. The fluffy pillows paired with a warm comforter are the cherry on top.

Oh, and the wines…the wines are amazing! Seriously, I’m going to start having to buy more New Zealand wines here in California. 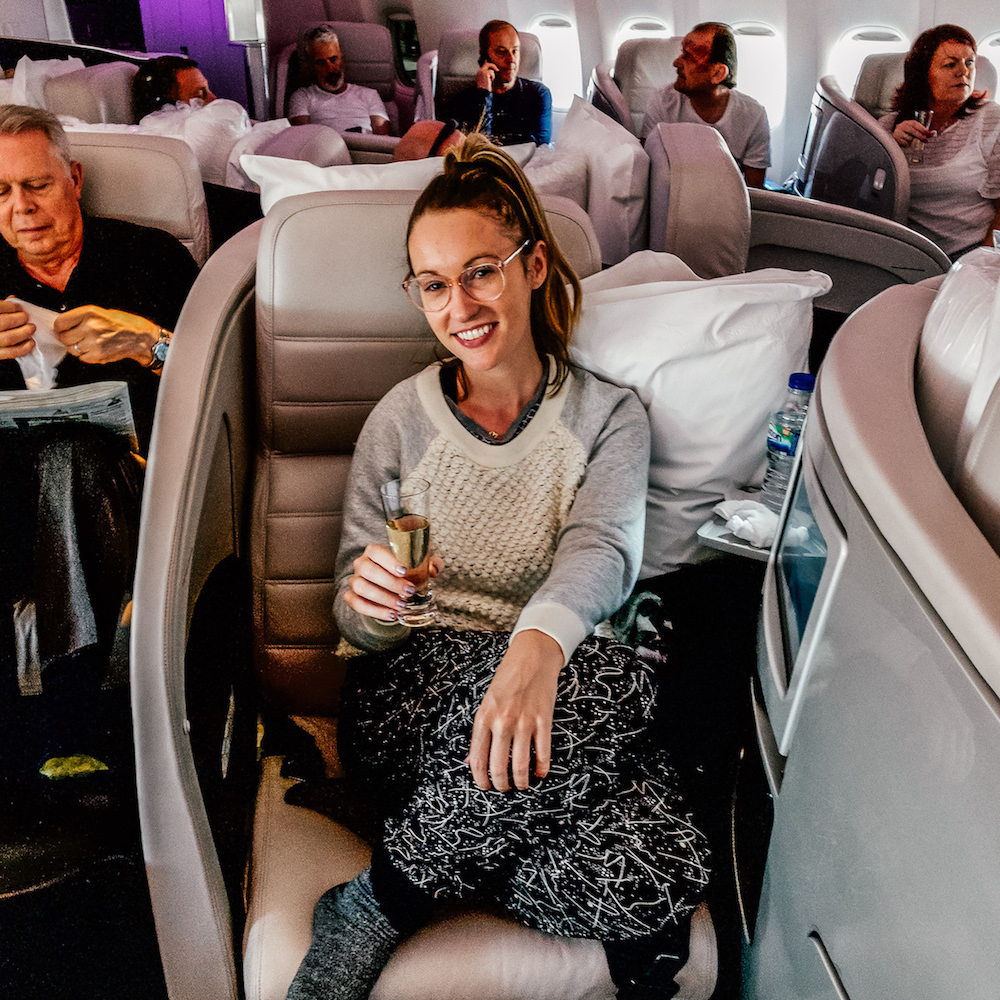 Stop to smell the roses

As blissful as my flight to London was, I needed a little pampering once touching down in London. So, I headed out to meet with the lovely Hannah from Love Great Britain. Since the sun was shining, we opted for Dalloway Terrace in Soho. The semi-outdoor space is inspired by the infamous character created by Virginia Woolf and is the perfect way to get some much-needed fresh air after a long-haul flight.

We treated ourselves to some strawberry daiquiris, while we took photos of their gorgeous flower walls. I soon learned that many places sport these floral-decor walls, which is such a nice way to honor London’s not-as-bad-as-it-sounds weather. Maybe I brought the California sun with me, but London is simply spectacular in spring.

The gorgeous setup of Dalloway Terrace is a surefire way to feel like a royal without breaking the bank. The menu isn’t necessarily cheap, but it’s also not the most expensive you’ll see in London.

My favorite part of the meal? Dessert! We ordered the watermelon martini flavored ones and they were oh, so refreshing. 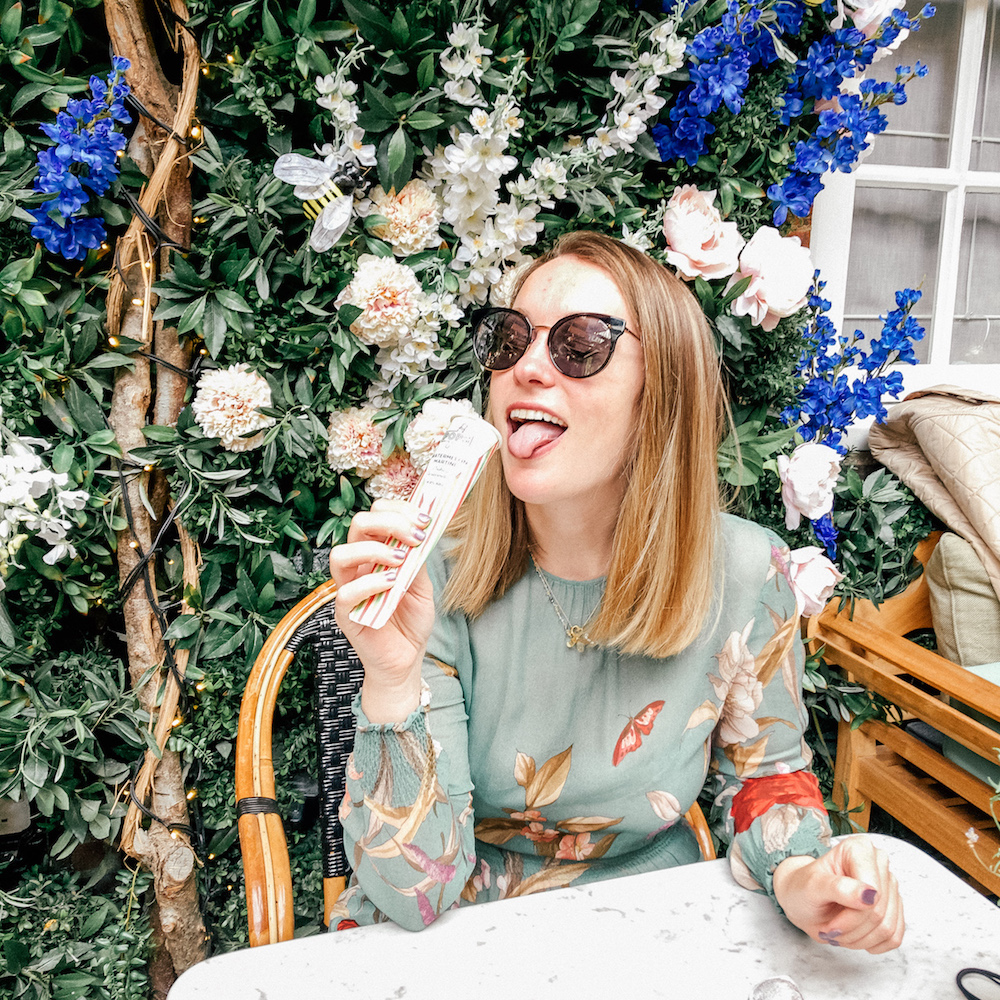 Lap in the luxury of your hotel

Ok, so this might require a slight stretch in your budget, but it will be very worth it. On one hand, London is extremely well-connected, meaning you can get just about anywhere using public transportation. On the flip side, I really enjoy walking so being centrally located was important to me.

Ham Yard Hotel, a Firmdale Hotel, was kind enough to host me on my first two nights and even upgraded me to one of their luxury junior suites that overlooked the adorable Ham Yard courtyard. Despite being located in the heart of Soho, the courtyard makes the Ham Yard feel super quiet and almost gives it a small-town feel.

Besides the room itself, I loved the decor displayed throughout. There’s a stunning library near the entrance, and it even has a ladder leading up to some bookshelves (who else remembers that iconic scene from Beauty and the Beast?!). They also have a restaurant offering indoor and outdoor seating, along with a lounge area that has a sky roof and where afternoon tea is typically served.

Best of all, there’s a spa and I pampered myself with a facial on my first day. Usually, if I do splurge on a treatment, it’s a massage but facials might just be my new favorite thing. I even dozed off near the end, I was so relaxed. 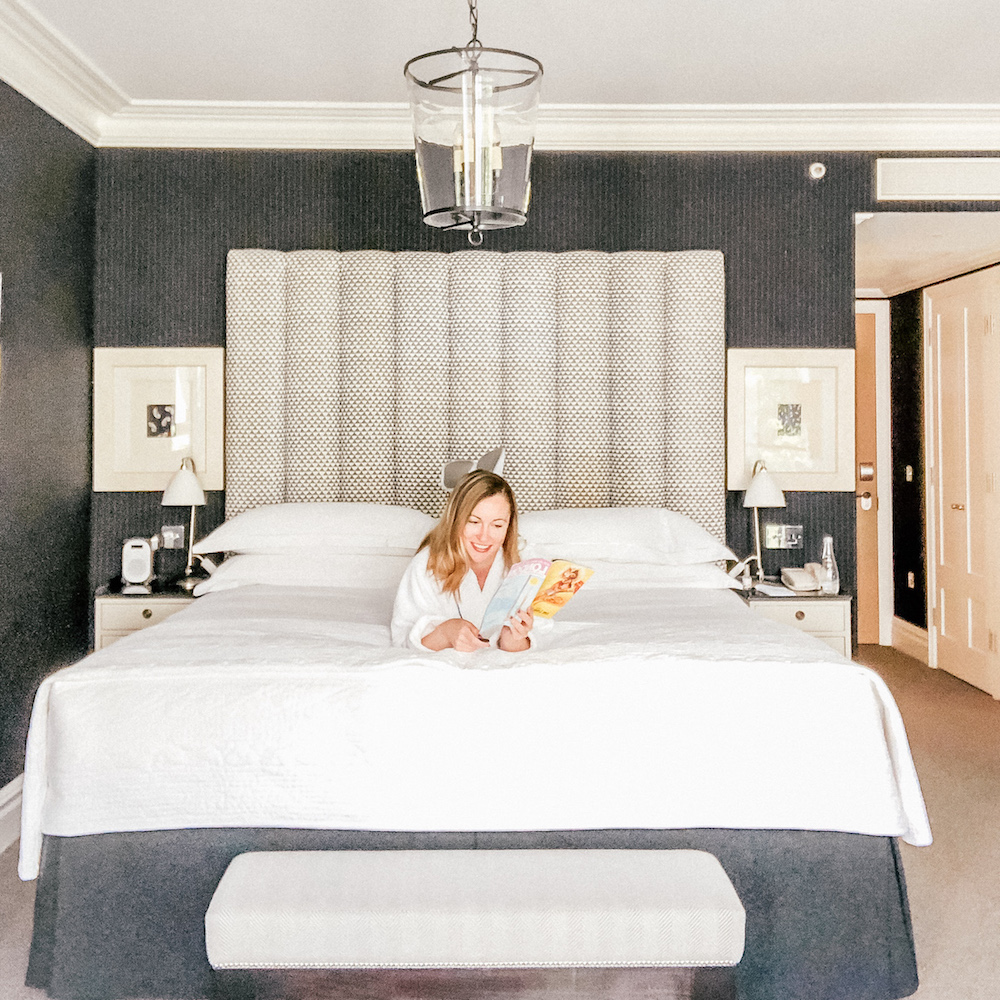 Take in the royal sights

If you’re on a strict budget in London, as I often am, sightseeing is an easy way to feel royal without spending a pence. My week in London grew hotter each day, sometimes reaching the mid-80’s, so I took coffee (and cocktail) breaks when I needed it. That said, as someone who’s not been living the “city life” the past few months, it felt so invigorating to wander aimlessly around a city I once called home.

Depending on how much you love walking, you can hit up most of the main sights on foot. I usually spend a couple hours wandering through Soho, Leicester Square and Covent Garden because they are all in close proximity yet there’s so much to see and do. Then, I visit Westminster Abbey, Big Ben (there’s scaffolding now, btw) and the London Eye in another afternoon.

For those on a time crunch, take advantage of London’s bus system. The double decker buses offer really nice views, especially when you’ve snagged one of the four front-row seats on the upper level. When I used to live here, I’d sometimes just hop on a bus and take in the view, often times having no destination in mind. 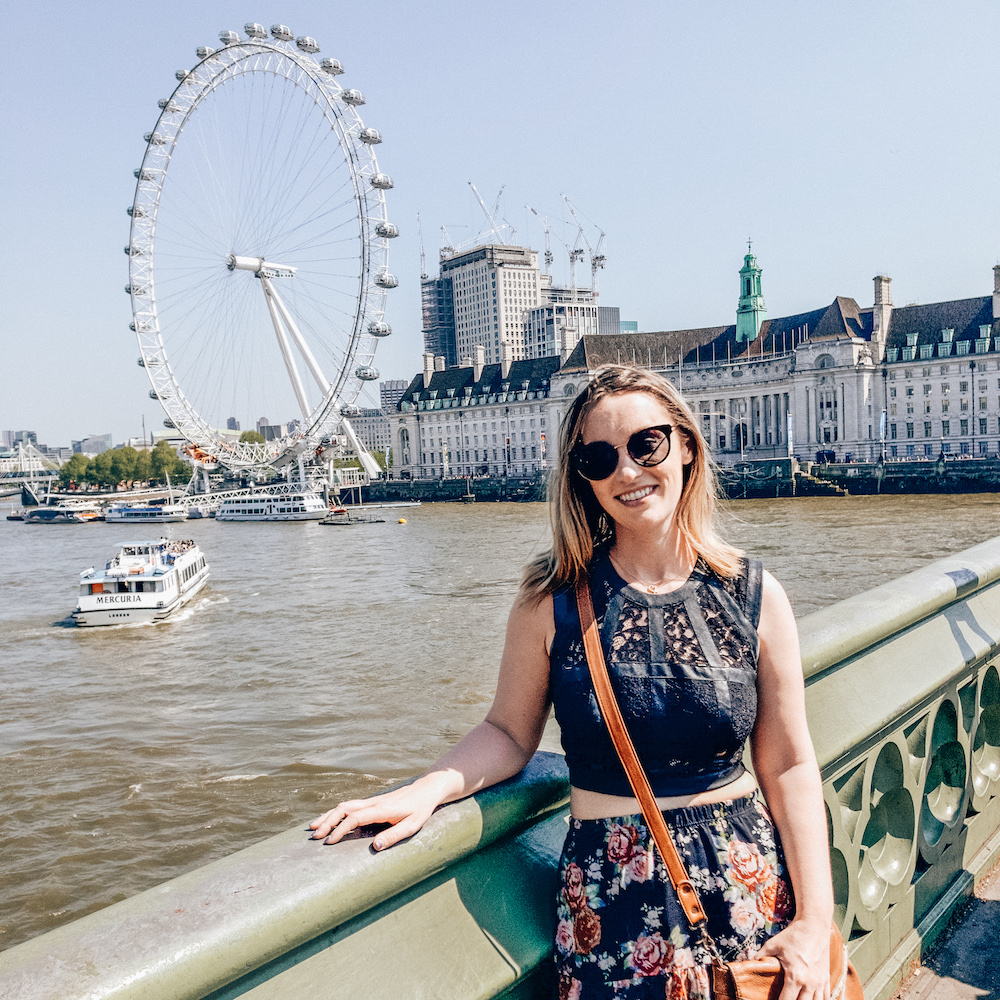 Being back in a city reminded me how out of shape I am these days. I think the main difference is that I’m driving much more than walking, and for the past decade of living in cities, having a car never crossed my mind. So, this trip, I did something different. I signed up for a barre class at Define London.

Sure, this isn’t necessarily something you’d think of doing on your vacation but it ended up being a major highlight for me. Besides, royals have to be in top notch shape and always look the part of fresh-faced princess, right?

Class was tough but super inspiring and by the end of our workout, I had exchanged info with two of the other students. It reminded me how friendly people are in London, even though they don’t always get the credit they deserved. In comparison, this camaraderie rarely happened when I’d workout in New York.

Oh, and even fitness studios have flower walls! 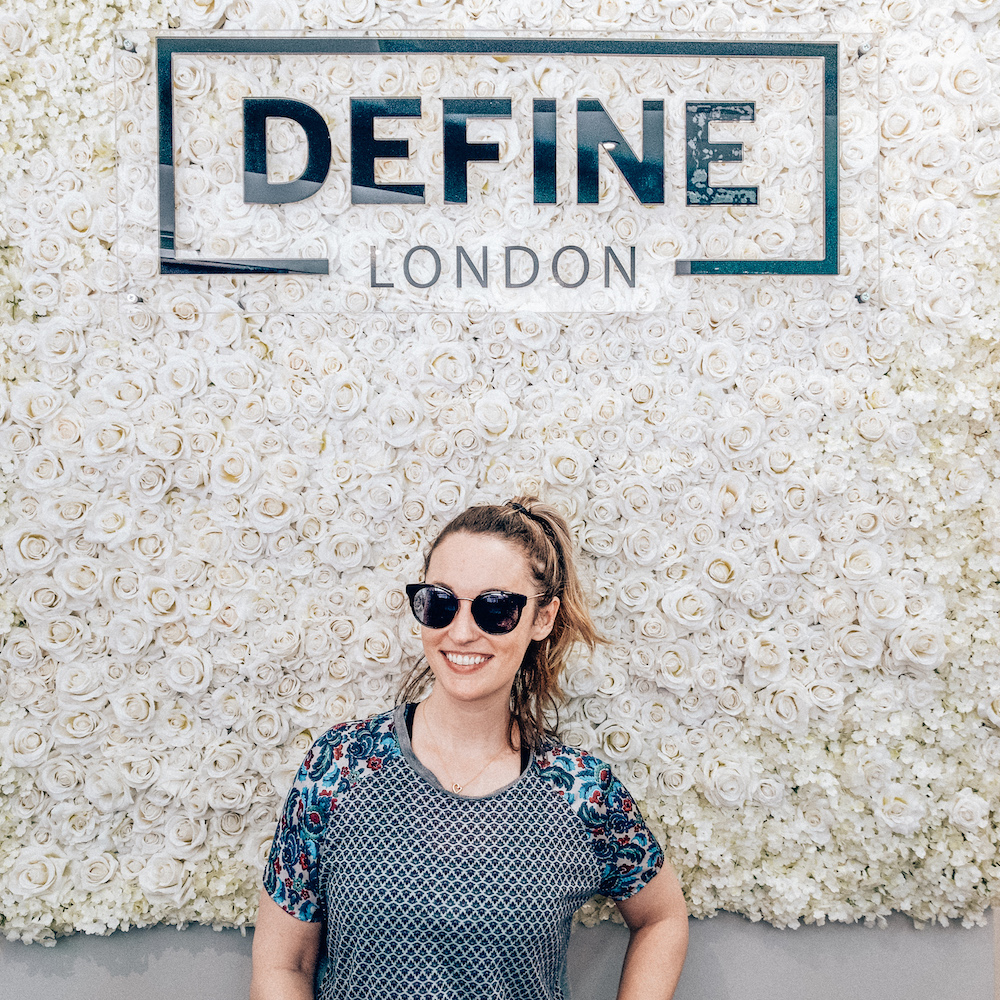 Last but certainly not least, sign up for an afternoon tea experience. Most hotels offer them, and they’re well worth the splurge. In true royal fashion, I opted for the The Berkeley’s legendary designer afternoon tea, Prêt-à-Portea.

Things kick off with a glass of Champagne, followed by your choice of tea. Then, traditional mini sandwiches come out along with a couple other small snacks. Then, the desserts arrive and it’s a major sugar rush. They save the best for last, with a bit sized ice cream cone and scoop of gelato. Check out my Insta to see how tiny it is.

Since the royal wedding was upon us, they served me a small dish of wedding-themed cookies, including a wedding dress and a fancy high heel. Next week, I’ll tell you just how tricky it is to make these sweets! 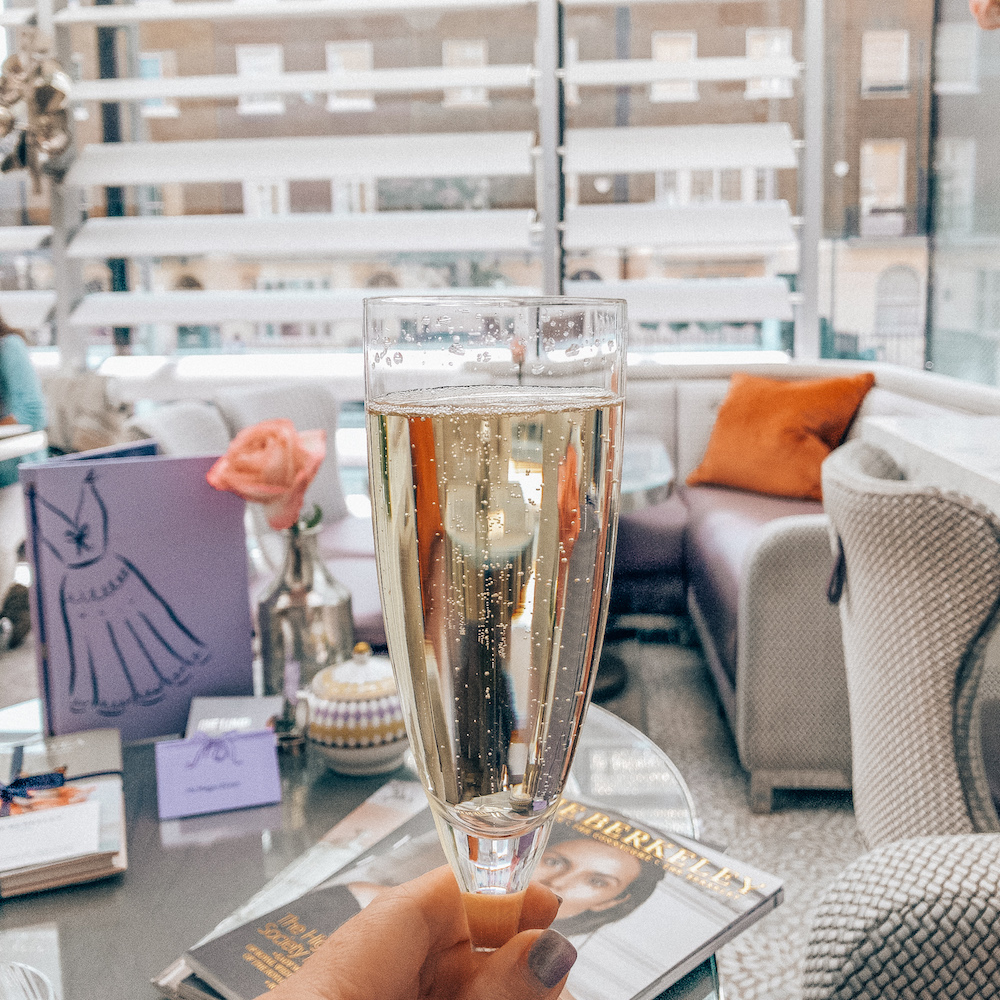 Have you ever felt like a royal while traveling? Tell me in the comments below!

This post is in collaboration with Love Great Britain, Visit California and Air New Zealand. All opinions are my own.