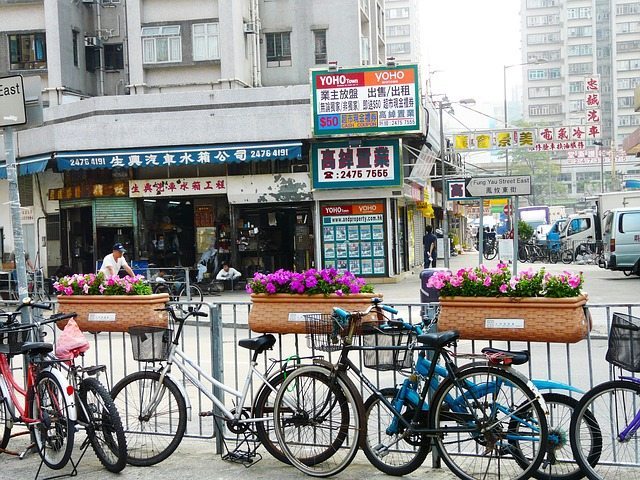 If you’ve been following my Google+ or Twitter posts (heck, even Facebook) lately, you might be wondering why I’m seemingly obsessed with Hong Kong. Well, I’m actually living here for the next four months! I arrived in mid-may but about two days later, I was on a flight to the Philippines so it wasn’t until returning from that trip that I actually began exploring my new home.

What did I discover? Well, besides feeling a bit nostalgic for both New York and London, I realized how much there is to do in this crazy amazing city. Yet, I also found myself doing many peoples’ “bucket list” activities in the first week. Thus, here is my quick guide to touring Hong Kong like a boss. I’ve also included a few free or budget alternatives because let’s face it, I can’t always like like a high roller, especially on a writer’s income. 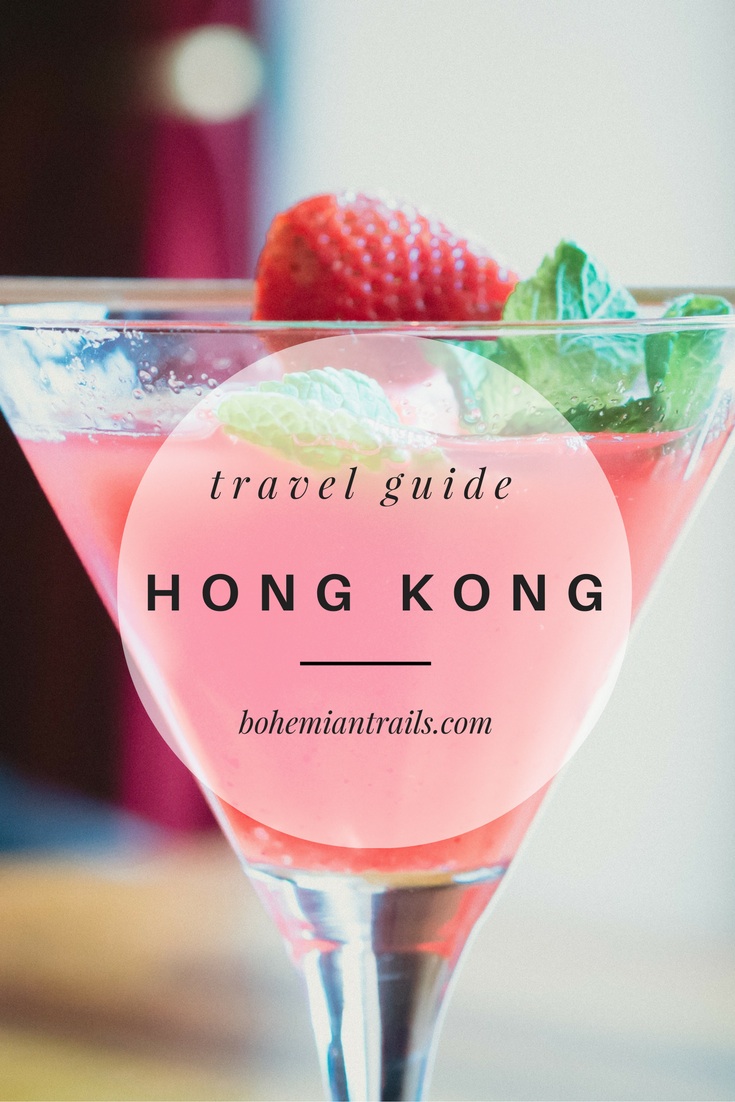 I got lucky with this one. My husband’s company, Bluesmart, decided to kick-off the summer in style by organizing a “junk.” If you’re wondering why it’s called a junk, you’re not alone. I still don’t quite get it. In basic terms though, a junk is a 10am-6ish boozy boat ride with great views. Boats take off from various starting points and once you’re on board, you have the whole afternoon and part of the evening to do as you please: eat, drink, swim and tan. Our boat was two levels and after about an hour of sailing, we docked for a few hours. The staff provides the alcohol and prepares lunch (albeit, this is part of the service) and it’s pretty much as relaxing as you might hope. If you do score a spot on the boat, make sure to drink plenty of water and wear sunscreen.

Budget alternative: Junks are often dependent on who you know and if you’re only in town for a few days, this might be a gamble. There are other boat tours far more affordable though, like an evening harbour cruise or a Victoria Harbour cruise. It really depends on whether you want to see the city during the day or all glittery at night. For me, it’s a toss up, as the city lights are simply spectacular.

Again, this is the case of being in the right place at the right time. After posting on Facebook a few weeks ago that I’d be temporarily moving to Hong Kong, a fellow travel blogger commented that she was there too. Long story short, we met for coffee and she just happened to have an extra ticket for a helicopter ride all over Hong Kong. To say that I was ecstatic would be an understatement. We flew with Heliservices on a particularly clear day and essentially flew into China. Well, not quite but as the last flight of the day, we landed at their headquarters which are not too far from Shenzhen, at least according to my map. I was surprised to see so much lush greenery mixed with tall, urban buildings.

Budget alternative: Helicopter rides are often expensive and if you’re not quite ready to splurge on one (although I highly recommend it) there are plenty of other alternatives. The picture below is actually take at “The Peak,” which is accessible via trail or tram. You can pay an additional small fee to reach the very top or walk across to the Galleria for a free and equally fabulous view. 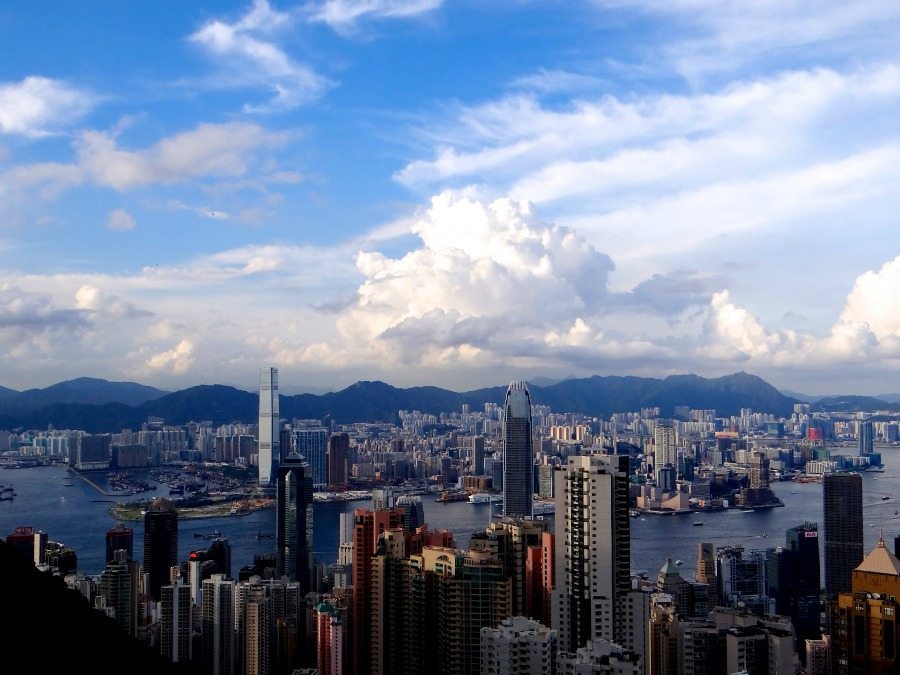 I opted to use a Flickr photo for this one because mine came out all blurry and I’m not sure they’d be too enticing. Lan Kwai Fong, otherwise known as LKF, is the ultimate entertainment district on Hong Kong Island. As it happens, my apartment is literally a thirty second walking commute away so it’s not all that surprising that I found myself here on my first Friday night in the city. I’m not going to hold back here…this is an ideal spot for a wild night. If you’re more inclined to have a low-key nightlife experience, skip to #4 on this list. I’d recommend wearing comfortable shoes as this part of town is very hilly and nothing too valuable because you’re likely to either get spilled on or spill on yourself.

Budget alternative: There’s a 7-11 on the corner and a lot of people (myself included) went there to booze up a bit before hitting the bars. It’s quite easy to do, as the party in the street is arguably more exciting than the bars and nightclubs flanking LKF on either side. It had been ages since I found myself in a 7-11 and to my surprise, I found all sorts of alcohol sold here. I opted for a mini bottle of wine. 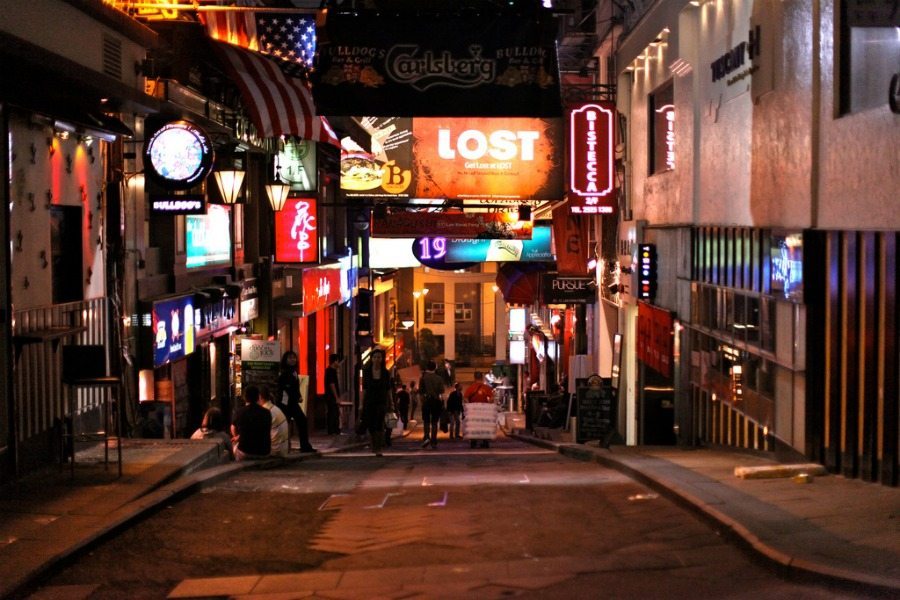 The day after experiencing LKF for the first time, I wasn’t exactly eager to repeat it the next night. But I couldn’t just stay in because well, Hong Kong is hypnotizing at night and I was hooked. So, instead of re-visting my days as a 22-year old who could drink anything and not have a hangover the next day, I reverted to my 28-year old self and hit up a rooftop. My friend and I opted for Sevva, which had an amazing view but was a tad expensive for my taste (I think I paid nearly $18 USD for a glass of wine…not even New York is that bad). To fair though, you’re paying for the view more than the cocktails and it really was spectacular to see the sunset and watch the “Symphony of Lights,” which is light and sound show at Victoria Harbour.

Budget alternative: If you can’t find it in you to splurge on a pricy cocktail, head to The Peak (mentioned above and pictured below) instead. I’d plan your visit between 5pm-8pm to see the day and night. If you stick to the Galleria, the views are free and if you do want to toast with a glass of wine, there are ample bars and restaurants located within the complex. 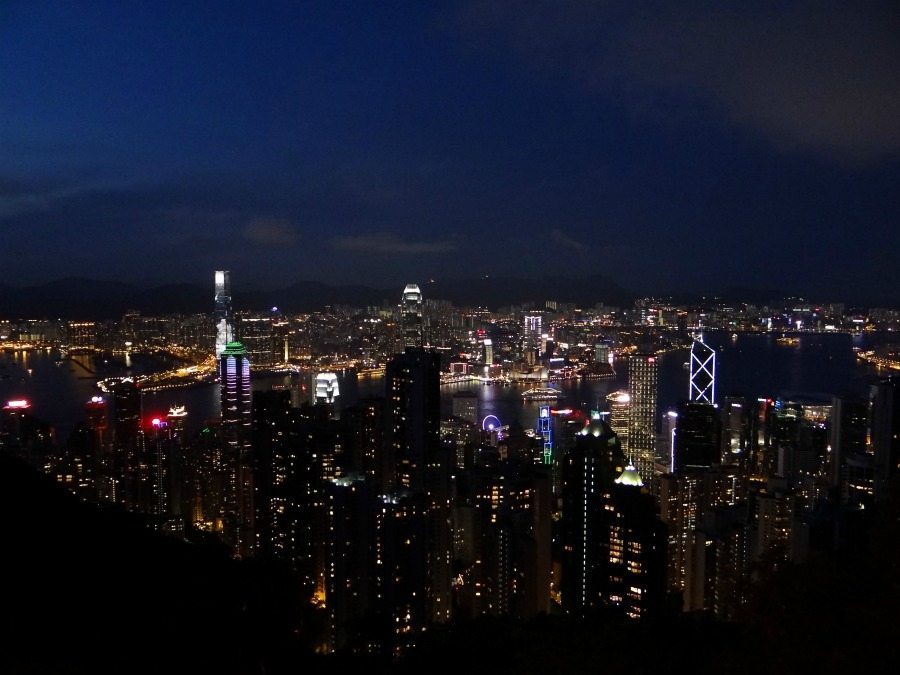 5) Get out there and meet people

This is probably the most important tip for Hong Kong because meeting people is the key to discovering the city. If I hadn’t met Sarah from Coffee with a Slice of Life, I wouldn’t have taken the helicopter ride or learned all the ins and outs of the city that took her months to learn. Just the other day, I was shopping for sandals in Zara and a woman complimented my shoes (not the Zara shoes but my beloved pair of BucketFeet). Even though I don’t think this has ever happened to me in New York, I was pleasantly surprised that it did. Bonding over shoes and travel, we exchanged emails and made plans to meet up for coffee the next week. I’ve since learned that this is not at all uncommon here.

Budget alternative: Meeting people and exploring the city for free is completely possible. One great resource is Meetup and I made sure to join a slew of groups before arriving. Even though I’m perfectly content being on my own, I’ve made an effort to put myself “out there” and experience all that Hong Kong has to offer. I’ve attended meetups ranging from a digital networking panel to a low-key bar night. 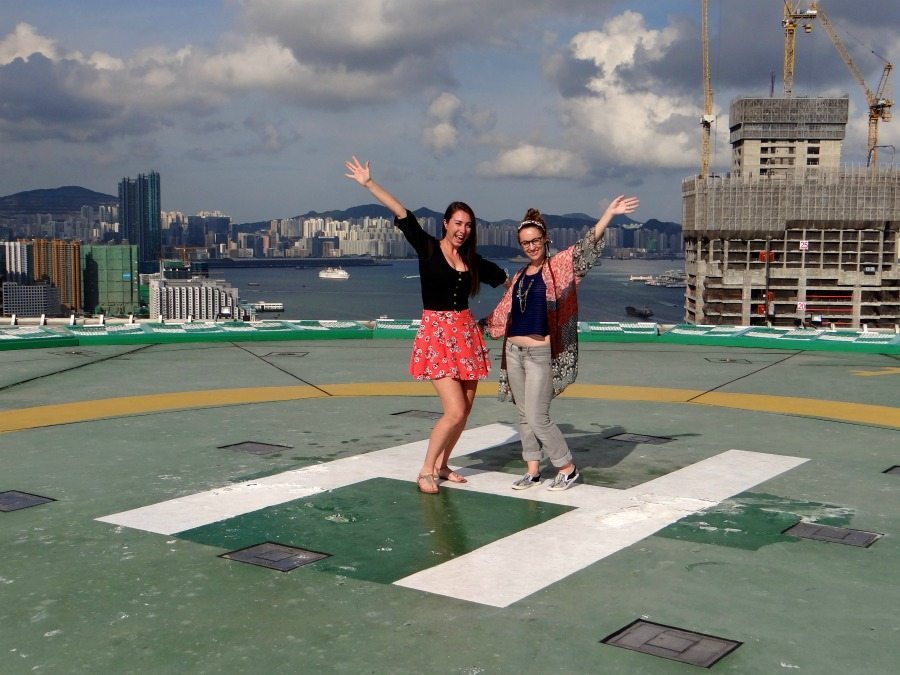 My helicopter tour was comped by Heliservices Hong Kong. All other purchases and activities were on my own dime.