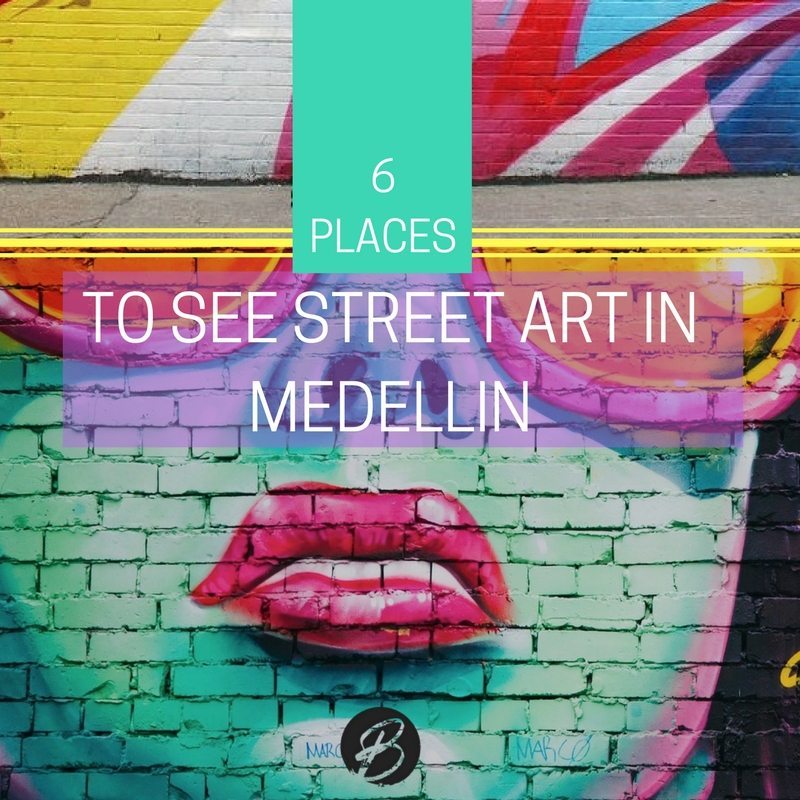 It’s been nearly two months since my whirlwind trip to Colombia and my mind is still reeling. So much creativity; so much color. If you didn’t get a chance to check out my Boho Fashion Guide to Medellín from last week, I highly recommend giving it a glance. There are so many talented local designers that are shaping the city into a fashion capital and the same can be said about the local artists that call Medellín home.

Thanks to the insider knowledge I gained by being a guest at The Charlee Lifestyle Hotel (more on them next week), I learned that the street art scene is quite vibrant, even in comparison to other graffiti “capitals” throughout South America. In fact, the Charlee commissioned several artists to create graffiti-esque murals along the stairwell of the hotel and in their outdoor parking garage. There’s even a mural of a monkey on the building’s facade. Today’s post, however, is all about Comuna 13. 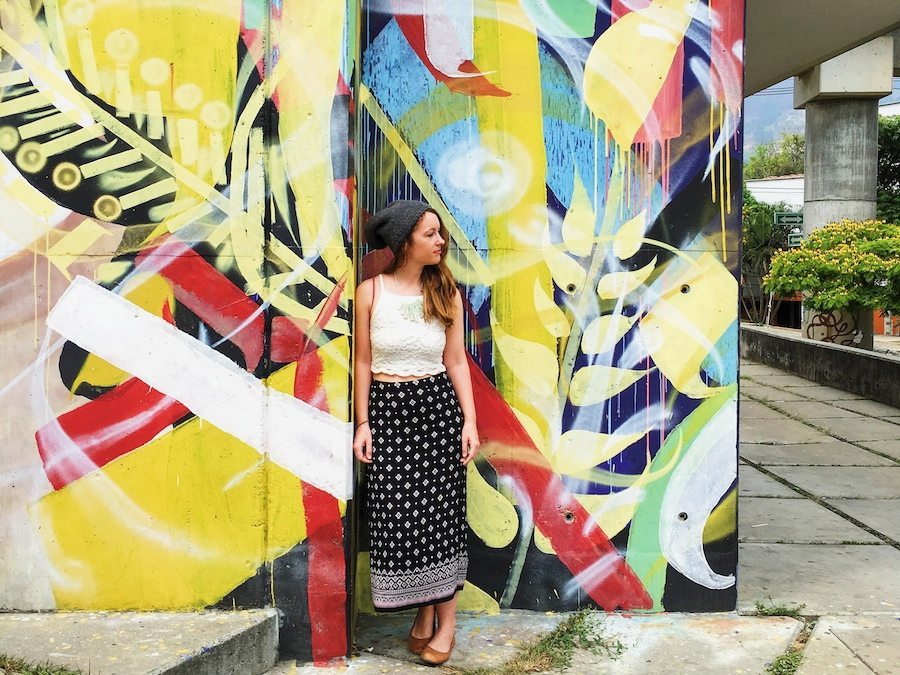 Comuna 13 might be one of the poorest neighborhoods in Medellín but it’s full of personality and spirit. A lot of the deterioration started during the reign of drug lord, Pablo Escobar, thus causing many people to head to the hills…literally. Overpopulation led to other problems like electricity outages, sewage leaks and the like. That, and the fact that Comuna 13 was at one point the most violent area in the city.

Fast-forward to today and the characteristically tough neighborhood has a much softer shell. Sure, it’s still gritty and a little dirty but it’s bursting with color and local flavor. There have been several developments in recent years, including a massive escalator that heads up the mountains. Having just lived in Hong Kong for six months, I felt right at home. The hills super steep (about the same as climbing 28 stories and a ), so I can only imagine how helpful this innovation is for the local community. 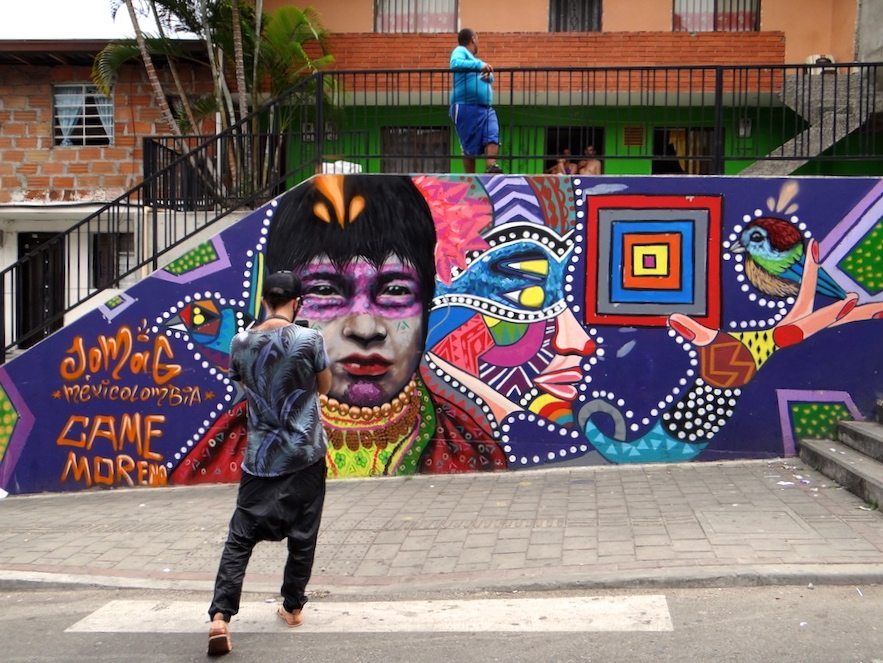 With a troubled history but a bright future, the murals reflect a bit of both. For the most part, though, our guide led us through more of the politically-charged murals. At first glance, it’s easy to get caught up in the vibrant colors or the cute animals being depicted, but once you remember the context for many of these pieces, the artwork comes to life in a whole new way.

While Comuna 13 still has somewhat of a bad reputation, street art is acting like an open door for travelers who might otherwise avoid the barrio entirely. Not only do the murals act as a history guide to the previous decades, but it speaks to the future generation. The local government has even recruited artists to paint murals throughout the neighborhood, much like artists are commissioned in other major cities across the globe. In return, artists are paid for their work and can continue spreading their visual message to the world. 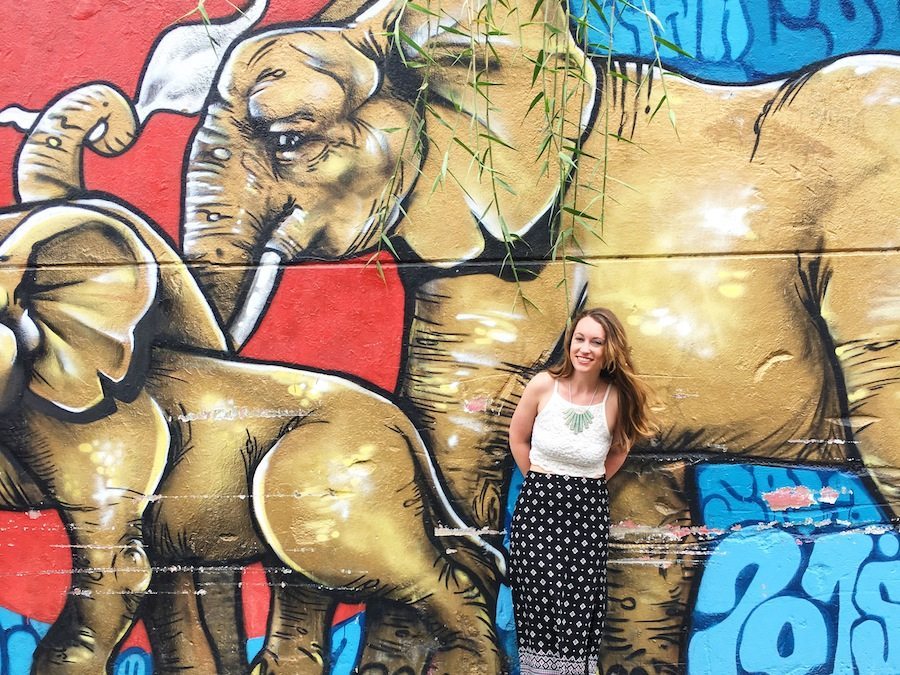 I have to say, I’m a little embarrassed by the picture of me by the elephant and here’s why. As an avid street art fan, I (understandably) got overly excited with every new mural we passed. That, combined by my adoration for elephants, resulted in a smiley-face Megan posing with artwork she knew nothing about. That’s the thing about murals though; if you don’t know the story behind the art, you might not get the full picture.

Five minutes post-photo, I learned that the elephants are crying and that the whole mural reflects how the people felt after a gang shooting. They are even holding little handkerchiefs in their trunks. Upon hearing that, my face crinkled up in confusion. But then I took another look and yes, it all made sense. Having that insider insight forced me to open my eyes to the reality of a former time. Anyway, lesson learned. Next time I will listen first and pose for the camera second. 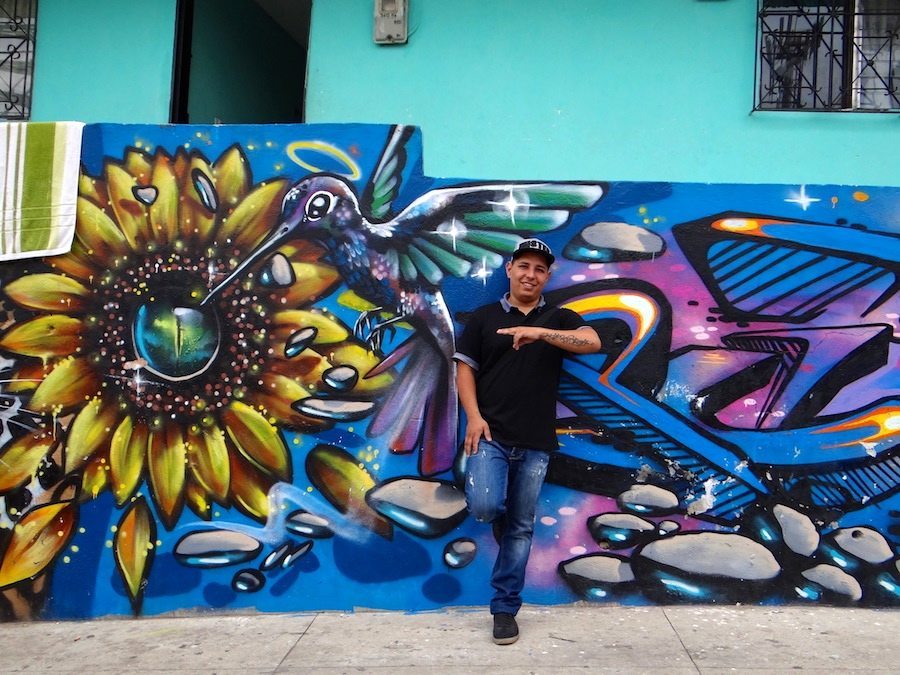 Now might be a good time to mention that our tour was led by an actual street artist. Here he is (above) posing next to his mural. PerroGraff is both a talented artist and the founder of graffitourc13 so, it’s safe to say that he knows what he’s talking about. More so, he’s truly passionate about the neighborhood’s past and excited about the future. I’m not just saying that; it was obvious. I’ll also add that I found him extremely humble and kind of “too cool for school” but in the best way possible.

When we arrived to his mural, he spoke for five minutes about other work before casually mentioning that this one was his…like it was no big deal. Except, YES, this is a big deal. I proceeded to humor him by snapping his photo. I’ve never been one to fan-girl over Hollywood celebrities but when it comes to fashion designers and street artists, I’m in awe. Case in point: the picture below! All in all, it was a very good day in the hood. 🙂 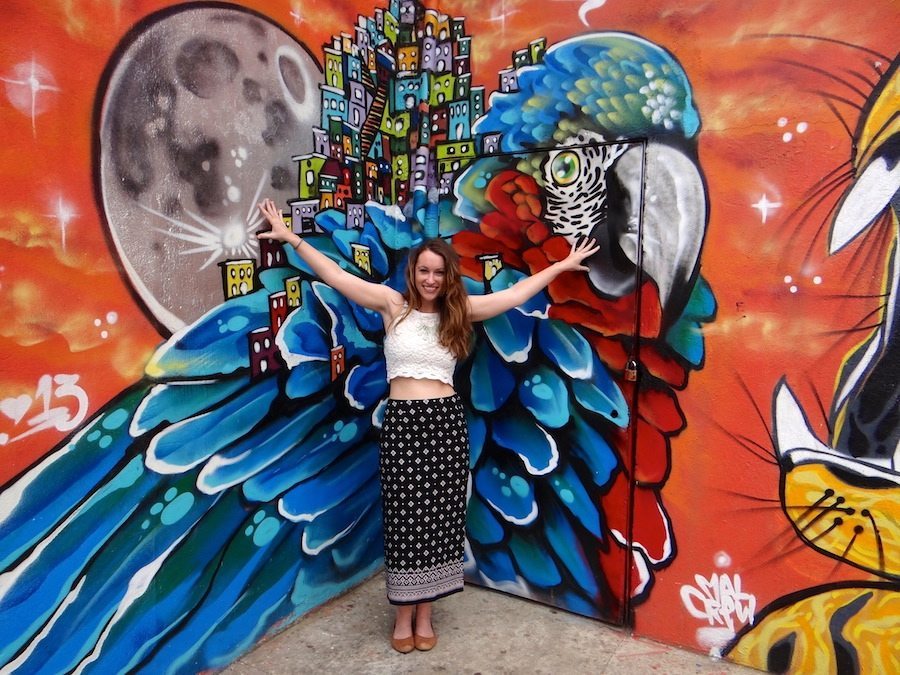 What’s your favorite city for street art? Tell me in the comments below!

This post is in collaboration with ext. 54 and The Charlee Hotels. All opinions are my own.