Exploring the Inventive City of Zadar 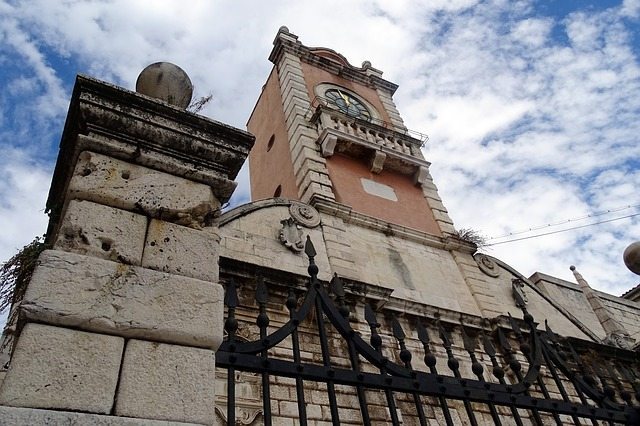 Let me just start off by saying that I loved Zadar. I also have a feeling that if I hadn’t done any research before heading to Croatia, I might have skipped this city altogether and that would have been a huge bummer. Before visiting the country, there were always two images that came to mind when thinking of Croatia: yachts and beaches. Granted, I’m probably not alone in those perceptions, as Croatia is a huge coastal destination. Yet, as I soon discovered, there is way more to this country than meets the eye.

Zadar is home to the inventive Sea Organ and the  Greeting to the Sun, both of which I’ll get to later. The picture below really has nothing to do with anything but I think it best sums up how I felt while in Zadar. This long bench also reminded me of a piano and I practiced playing a few songs with my feet. The bench sits just across from the Sea Organ, so the musical theme makes perfect sense. 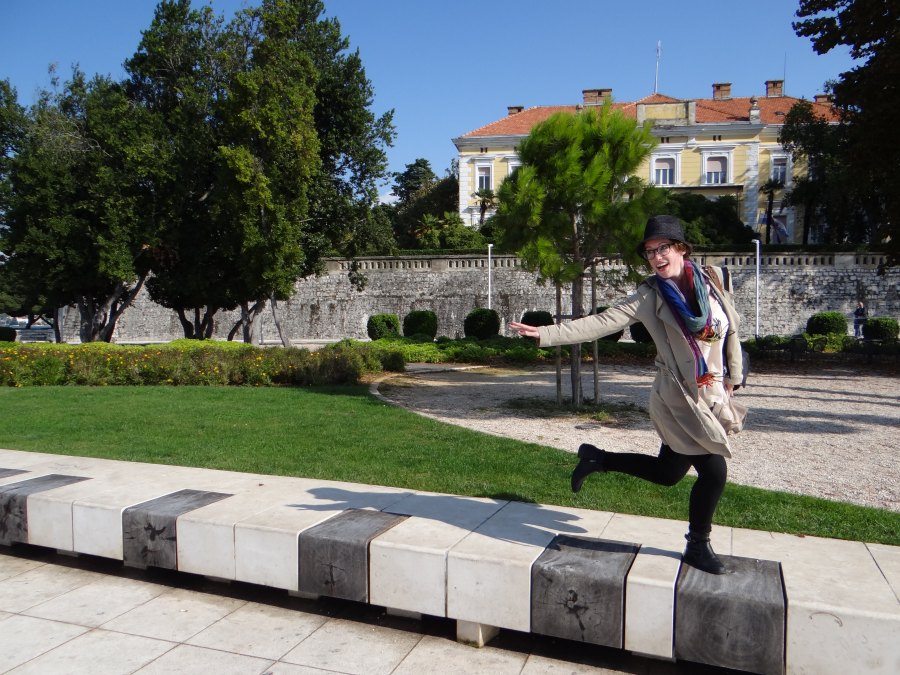 When our guide first told us about the Sea Organ, for whatever reason, I was thinking of a large organ like the ones I’ve seen in churches. When I didn’t see anything at all, I assumed there was some musician playing nearby, like the ones you hear at tourist attractions like the Sacré-Cœur in Paris. I was beyond impressed when I finally understood what actually creating those random but harmonious sounds.

The organ is just under the surface of the water and as the waves hits the different chimes, music plays out of the circular holes you see on the large marble steps above. Architect Nikola Bašić is the genius behind this operation and the project became open to the public on April 15, 2005. During the summer months the ocean is much calmer so you can’t always hear the chimes but during our October visit we heard music playing in nearly every part of the city. I’m sure that’s no fun for the residents living close by, but for me this was literally music to my ears. 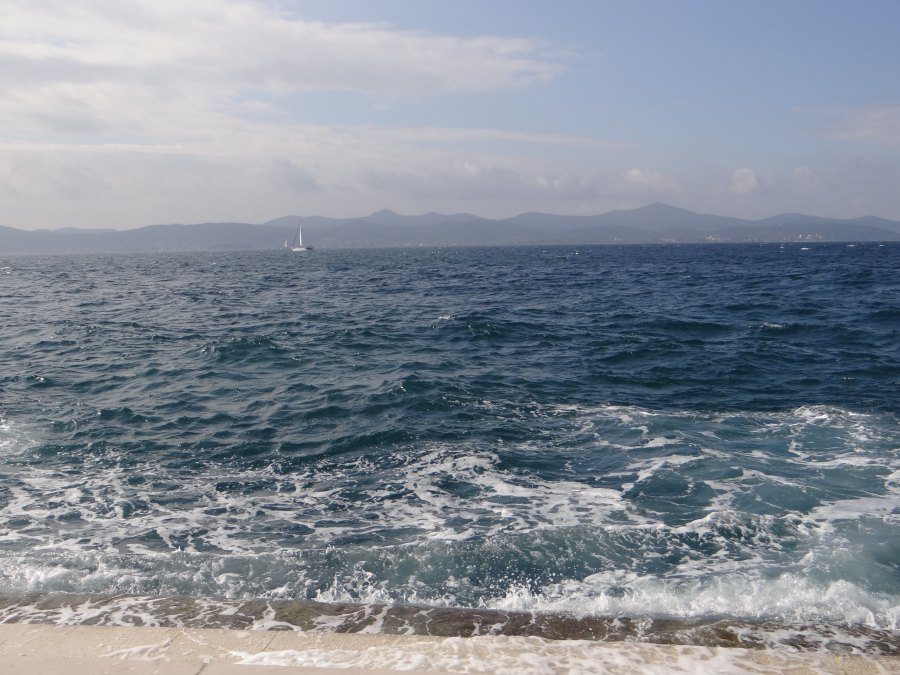 I won’t be coy here. I ate a lot on my trip to Croatia and some of my favorite dishes were consumed in Zadar. The plate below is fish (cod I believe) wrapped in bacon and it came with a side of fresh vegetables. I also sampled some of the gnocchi and my drink of choice was their local cherry juice.

This may be obvious to many, but I was surprised that a lot of Croatian cuisine is similar to what one finds in Italy. On many of the menus, there were large selections of pizza and pasta and that made me very happy. Of course, as soon as I remembered how geographically close Croatia is to Italy not to mention the fact that Venice once controlled Opatika and Rijeka, it all made sense. I also noticed a few influences from Hungary and Austria but Croatian chefs are masters at putting a unique spin on even the most classic dishes, at least from my experience. 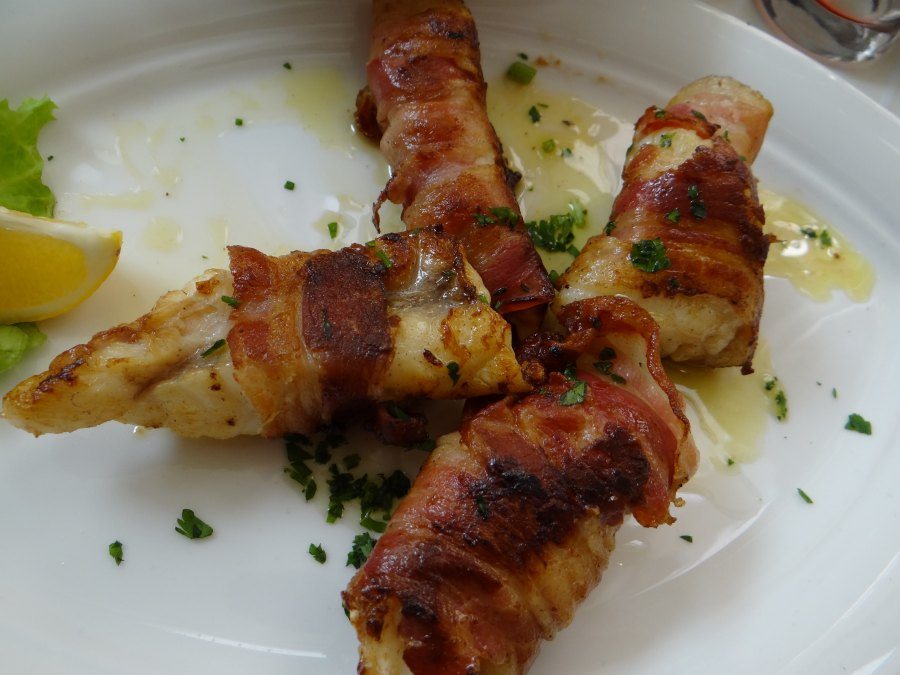 Initially, I planned on doing a street style fashion post from Zagreb but after two days of almost non-stop rain, I didn’t have much material to work with. What I didn’t expect was to spot so many fashionable trendsetters in Zadar but indeed I did. Zadar isn’t a huge city by any means and yet, there were so many different styles represented. From laid-back to classic-chic, every local that I photographed sported a different look, ones I can only guess showcased each of their personalities. Naturally, I found most of these women in the main shopping areas: Gundulićeva and Frankopanska Streets, Flower Market and apparently the L’OCCITANE store. 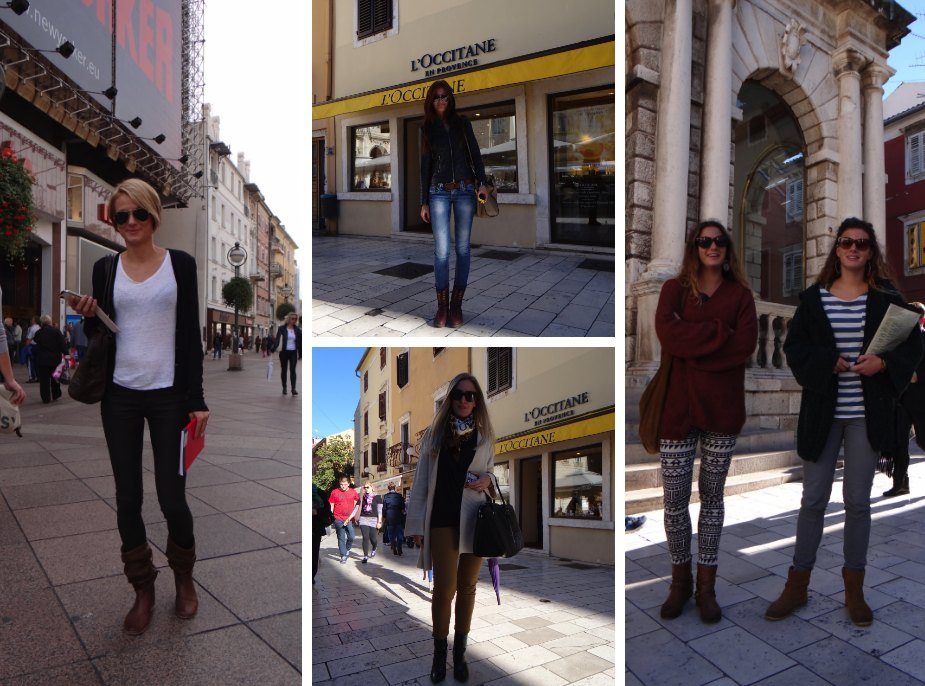 If I learned one thing about Zadar it’s that it is a city of contrasts. Ancient churches and cobblestone streets contrast the innovation of the Sea Organ and avant-garde fashion. The picture shown below is of St. Mary’s Church, one of Zadar’s most iconic landmarks, located near the Roman Forum and opposite St. Donatus’ Church in the old city. Depending on which way you’re facing the church, to one side you have the ocean with the clever Sea Organ and Greeting to the Sun and to the other you have an intricate grid of connecting streets featuring countless stores ranging from designer accessories and handcrafted souvenirs to traditional restaurants and cozy ice-cream shops and cafes. 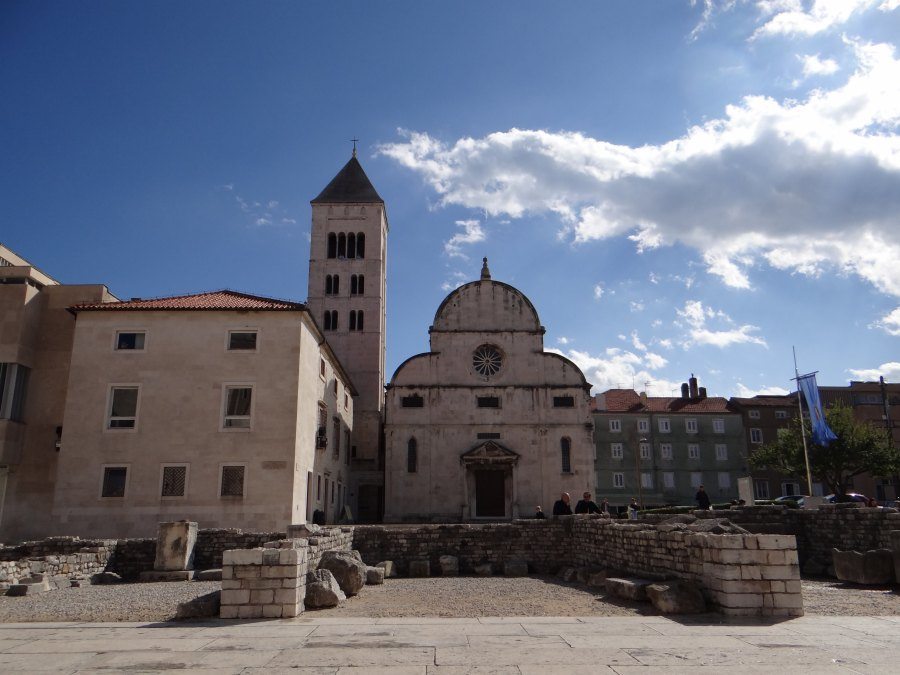 Speaking of churches, one of the coolest ones we saw was the St. Donatus’ Church I mentioned above. The circular shape of this church instantly makes it different by default. It dates back to the 9th century and in the 15th century its name changed from Church of the Holy Trinity to what it’s called today. Currently the largest example of Pre-romanesque buildings in all of Croatia, the shape is common to the ones you’d see during the Byzantine age in Dalmatia. As historic as this church is and as detailed as the interior carvings, we learned that couples can and often do perform their marriage ceremonies here, thus bridging the gap between old and new. 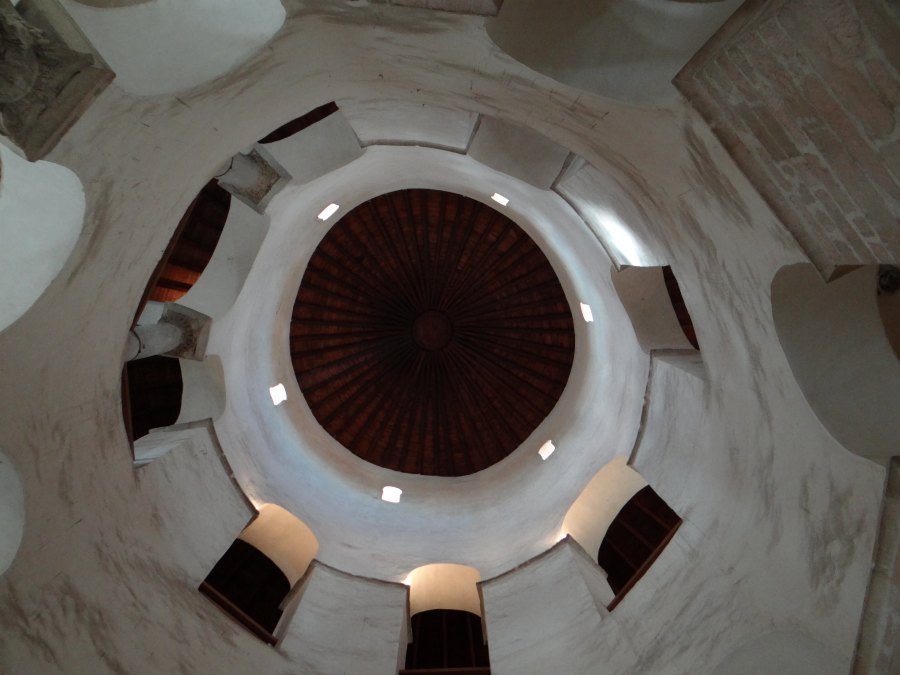 Zadar is famous for its sunset partly due to Alfred Hitchcock. In 1964 he wrote, “Zadar has the most beautiful sunset in the world, more beautiful than the one in Key West, Florida, applauded at every evening.” I’d have to agree with Hitchcock on this one because even though our group didn’t actually make it back to the seafront to watch the sunset, this was our view from about twenty minutes away. I’ve never considered myself picky when it comes to sunrises or sunsets but I have a feeling I will be going forward, thanks to this lovely view. Even though the five of us were all staring into the sky together, I felt a calming loneliness come over me, almost as if I had this moment all to myself. 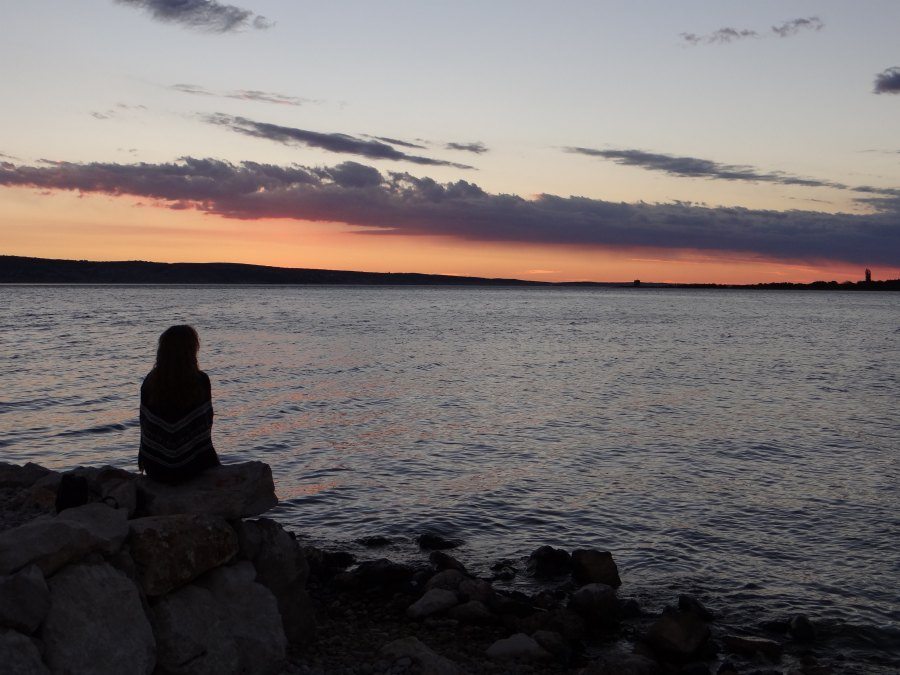 Greeting to the Sun

Coming full circle, the Sea Organ is located mere steps away from what is known as the “Greeting to the Sun.” This is another icon of Zadar but one only a few years old. Similar to the Sea Organ, Nikola Bašić designed this architectural feat that is 77 feet in diameter and contains three hundred multilayer glass plates within the stone circle. During the day the solar panels absorb energy from the sun and by night, the energy consumed powers both the light display and part of Zadar’s waterfront. The lights change color and positioning so it sort of looks like the colors are performing a dance.

I found the lights to be very bright but apparently the intensity was average. The day we visited Zadar wasn’t terribly sunny and that affected how luminous the lights appear. I honestly can’t imagine this light show being any more thrilling but I guess it is if you come on a really sunny day. If you’re in town, I recommend heading to the port of Zadar to watch the sunset and then, stick around for the amazing light show that ensues. 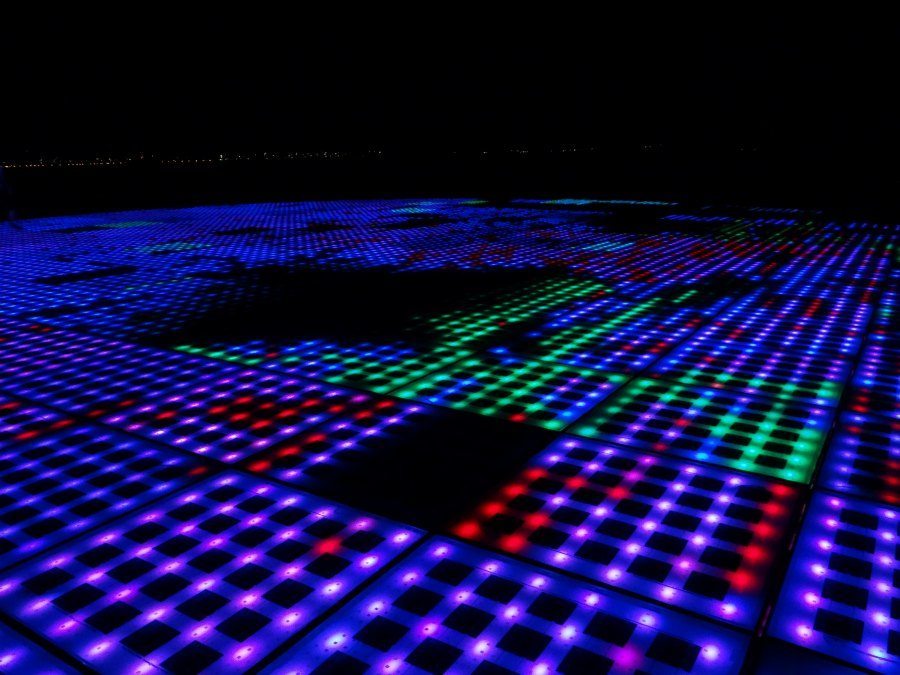 What’s the most inventive city you’ve ever visited? Tell me in the comments below!