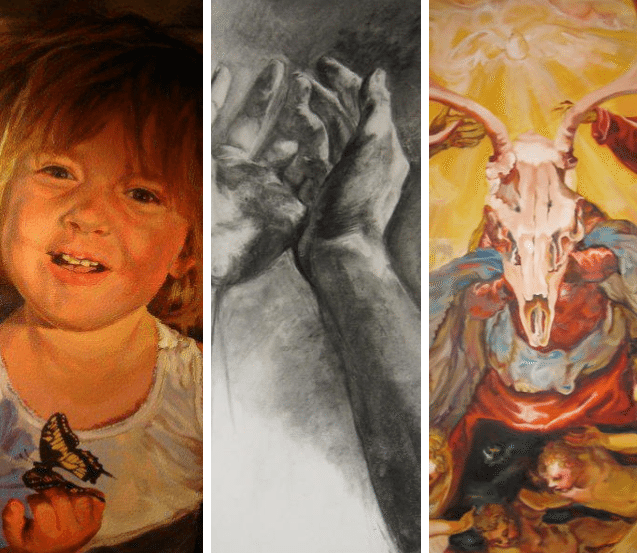 Our featured artist this week resides in Brooklyn, New York and focuses on urban art, reflective of the area. Kathryn Klopp specializes in portraits, drawings and paintings using a variety of mediums and artistic techniques. Travel has been a constant influence on the young artist, having studied and lived in Cuba for a time. 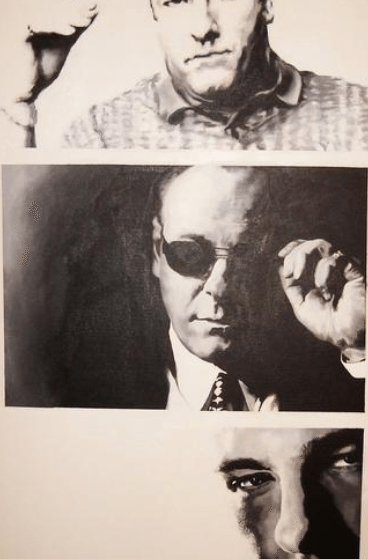 How/when did you begin sketching/painting?

I think I really have been painting and drawing since I could hold a crayon.  My mother confirms this. She has stories of me drawing on walls, furniture, my sister’s things, etc.  One of my earliest memories is getting in trouble for trying to draw on the carpet. I make a connection between an early obsession with trying to depict things or test materials with my current need to paint. As a kid I didn’t get to watch TV or play with many toys, so pen and paper provided endless distraction. I think books provided that escape for my sister, but I hated reading, so it was art for me.

What sort of background or training did you receive (if any)?

Until college, any technique I used I taught myself through trial and error or looking at art and magazines. I began taking classes when I was really young—about 8 years old—and consistently after that, but there wasn’t ever really a teacher or a lesson. We just played with art.

I minored in art in college and this was actually the first time anyone taught me classic technique. I was pretty ignorant. Nevertheless I wasn’t about to major in art. To me, that would be like majoring in eating. Art is a part of life inseparable from living.  There’s only so much that can be taught.  It’s more important to be sure of the message you’re sending in a piece than the technique you’re using to send it. There’s a lot of social commentary, philosophy, history, and classic mythology in my work. I learned all that by taking non-art classes. 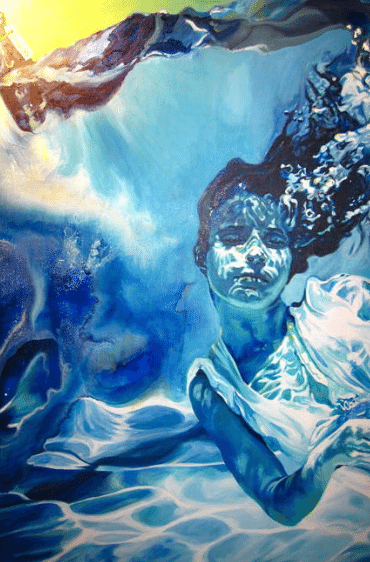 How would you describe your art style and how were you able to develop it?

My style is bricolage. I use the term in almost the same way that Dick Hebdidge used it to describe the punk aesthetic. Hebdige explains how punks extracted things (words, objects, or images) from their “natural,” obvious, or safe contexts and re-contextualized them to create radical new meaning. I have a similar process for my paintings. I juxtapose images from various contexts that together have an awful or awesome new role. This isn’t the same as collage. Images I reconstruct are not arbitrarily put together.  They don’t follow any logic of belonging together. They don’t come together because of any mainstream ideology. They go together because my unique vision based on my own set of experiences puts them on the same canvas.

Can you sort of take me through your creative process a little? (i.e. How do you decide what or who to paint?)

My works kind of decide their own subject matter and paint themselves. I don’t think it’s possible to ever create something exactly as it occurs in your brain, and usually not even close. So somewhere between my initial vision and my imperfect hand and imperfect tools is the final product.

Even if I was perfect and could exactly realize what was in my head at some point, the paint dries itself. The paint is liquid, so it moves on the canvas after you stop moving it. It ages and changes colors and sizes.  It does weird things to the color next to it. So rather than fight that process I just do what the paint tells me, just respond to the changes it makes to itself. 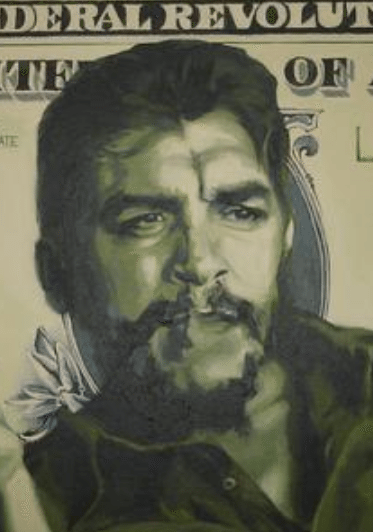 I also do a lot of commission-based art where someone sponsors me to paint something specific. There’s a lot of disdain for commission-based artists in the art community. I don’t listen to the haters because I can’t imagine a much higher purpose than realizing someone else’s vision. It’s a privilege to be invited into someone else’s head where they have an ideal for a painting and then I take that and run away with it to show them something more than they originally imagined. It’s a crazy heightened relationship.

What are your main sources of inspiration?

Travel!  I studied in Cuba for a while and I am still trying to paint it out of my system. I did this giant painting of the Cuban flag recently, which, trust me, was not meant to be nationalistic at all. Anyway, the canvas tipped over and because of the cheap material a giant hole ripped in the nearly finished canvas. I ended up patching it with dry wall spackle and then ultimately burning holes in it to cover the tear. The result was something much more “Cuba.” Cuba: where they have to patch their 1940s cars with coat hangers, plywood, and garbage bags for lack of new parts. Where another hurricane comes every year and makes a new hole in your house that you have to fill. Destruction begets creativity. That’s sort of what I mean by paintings making themselves.  I’m pretty sure that canvas suicided on purpose and forced me to think Cuban.

Can you explain your use of color and shading and what it brings to your art?

I’m into kitsch right now, so I like kitschy colors. My brush strokes and shading are pretty obsessive, definitely a reflection of my obsessive compulsiveness. An art teacher once said that in the art studio OCD becomes discipline. It’s so true to me. I am never more disciplined than when I’m painting, so it’s a good thing no one ever tried to fix me. 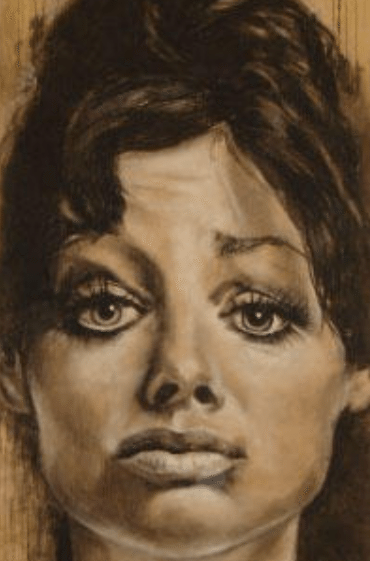 A lot of people paint urban subject matter, but I think my urbanism is more in my execution, my materials, and my mentality. I try to represent a hip-hop ethic since that’s basically the essence of urban art. It grew out of the total neglect, destruction, and hellish burning of the tenements up in the Bronx. The youth added value to an incredibly undervalued space…. Getting your name and your style out there and forcing the establishment to notice you when it was decidedly ignoring you or erasing you. Now that gentrification is in full force, suddenly urban spaces are hip and valuable. Hip-hop is vilified. Graffiti has no place. Nobody cared when it was just the hood. They tried to burn the whole place to the ground to build a highway.

What advice can you offer for up-and-coming artists?

All Photos via Kathryn’s Official Gallery