Bike Ride Through the Cambodian Countryside 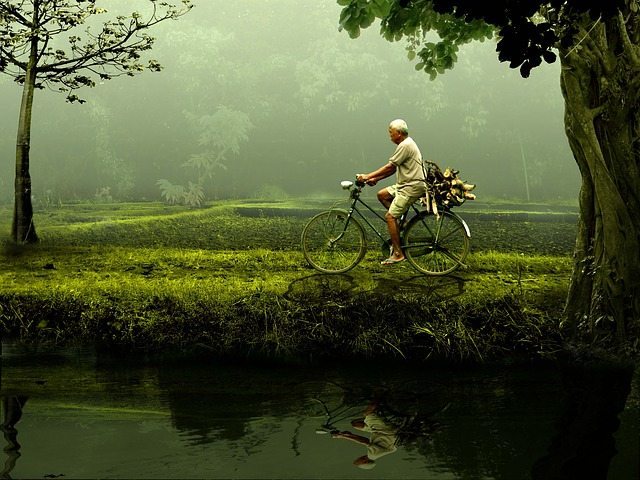 This post is by Karina Schroeder, one of our contributors.

Bright green fields stretched to my right and left, scattered with small wooden shacks with resting farm animals, drying clotheslines and barbed wire fences. A bright red dirt path stretched in front of me. The air was hot and extremely humid, a combined feeling of refreshing and stifling. There were no cars and no mopeds, only bikes running over the million little rocks stuck within the country road.

The vivid colors, open air and bicycles were all in the Cambodian countryside I had the privilege to travel through in October. The experience taught me an important and unforgettable lesson: One of the best ways to spend time exploring a new country or city is to do so through bike riding.

Bike riding, especially in smaller, more off-the-beaten-path destinations, allows you to go places and see things in ways that traveling in cars, trains or airplanes will never let you do. You can take your time and relax, stop where you want to and go where you want to with little hassle and with little disturbance of the area around you. You get to enjoy the open air and do a little exercising while actually interacting with the people and places that you see. 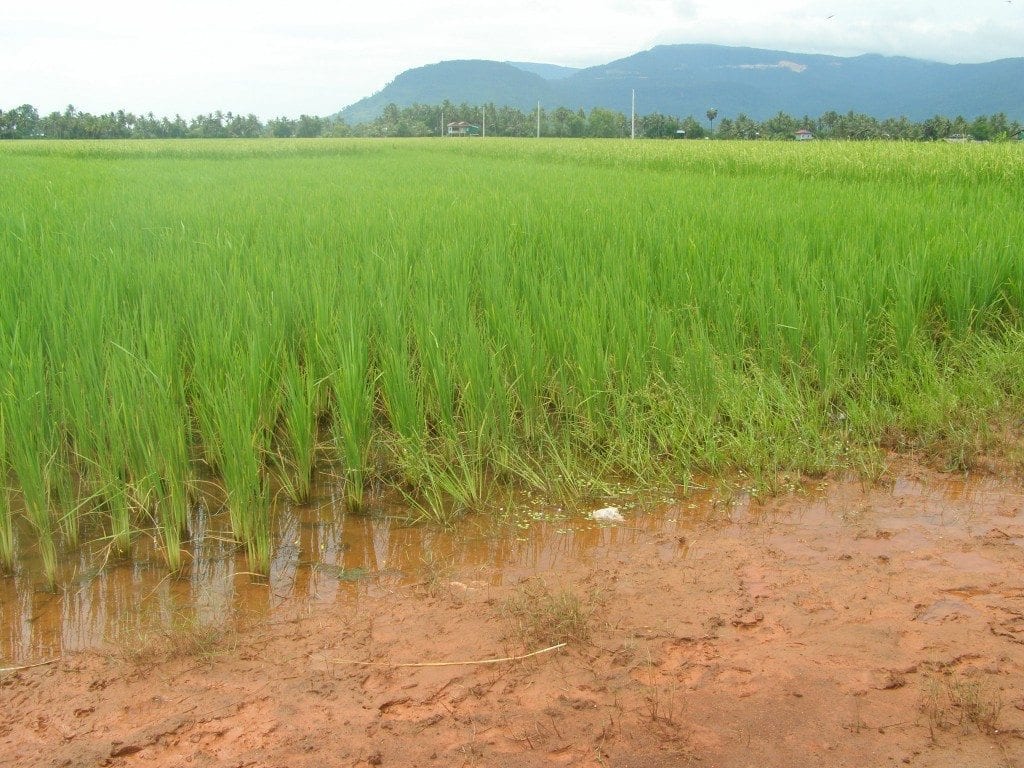 Bike riding may be a little more time consuming than other modes of transportation, but the experiences you have while doing so will almost certainly be more memorable than staring out a window. This is what I discovered when I made proficient use of bicycles in one of Cambodia’s smaller, southern coastal towns. I spent the better part of a day bike riding through dirt paths, past cow herds led by dogs and little children, and along stretching rice fields and salt flats.

I ended up having the most memorable experience of my whole trip- Angkor Wat temples, Tuol Sleng and Killing Fields all included.

My destination was Kampot, an old French colonial hangout now suffering from the same poverty afflicting most of the rest of Cambodia. The town is very small, and doesn’t attract near the number of tourists or ex-pats as Phnom Penh and Siem Reap, but it’s all the better for it.

Kampot has one of the country’s finest ensembles of old colonial architecture, but I admittedly didn’t spend much time in the city center. Instead my traveling companions and I took our rental bikes (another plus in Cambodia: bikes cost about $2 to rent for the whole day) and headed on a path leading to the countryside. We went to the farming fields and shacks of poor farmers who have undoubtedly seen very few Westerners in their day. 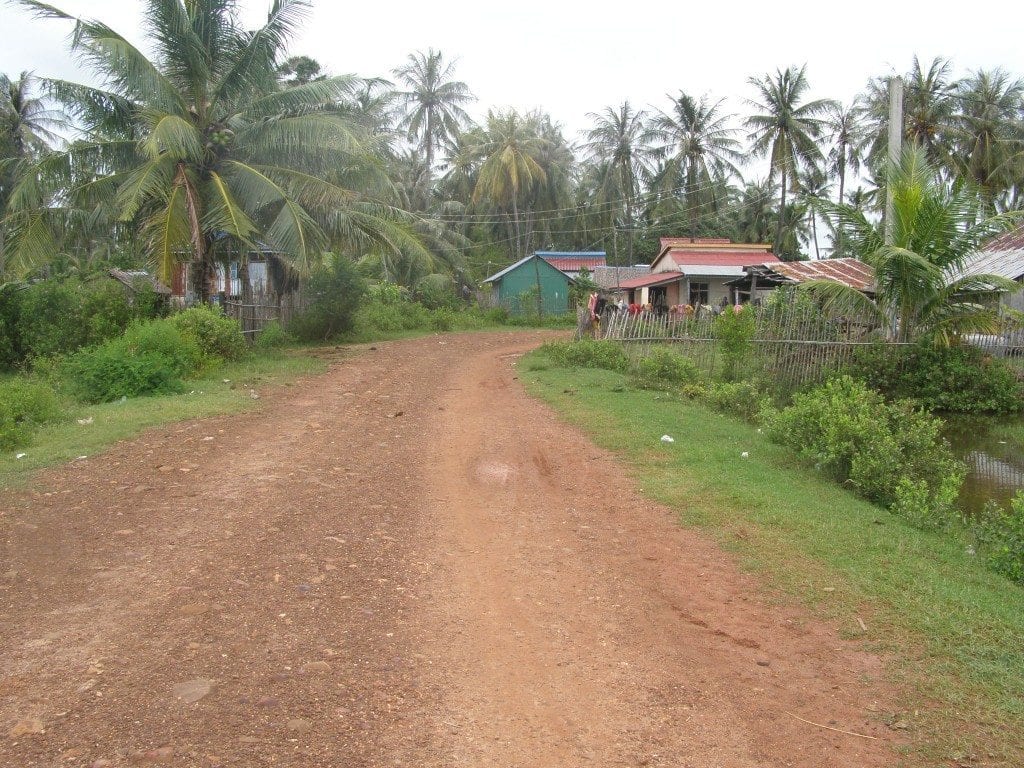 There was no destination and no itinerary, nothing and nobody rushing us through the journey. We kept to the path as the fields flanked around us, stopping only for an occasional photograph.

Most of the scenery was the homes of local farmers, the dirt road and rice fields: an accurate depiction of how so many Cambodians live their daily lives. Gone were the pothole-filled roads left un-maintained by corrupt government officials. Gone were the hoards of mopeds and vehicles cruising down the main roads. Gone was even the slightest hint of visiting tourists to the region.

One thing that remained, however, and which we experienced very often in Cambodia, was a personal and genuine friendliness from the families and children we passed by. Excited children constantly greeted us with shouts of “hellloooo!” both up-close and from afar, and their parents often smiled and waved to us as well. They welcomed us to their land openly and without reservation, furthering the sense of belonging I was already beginning to feel. 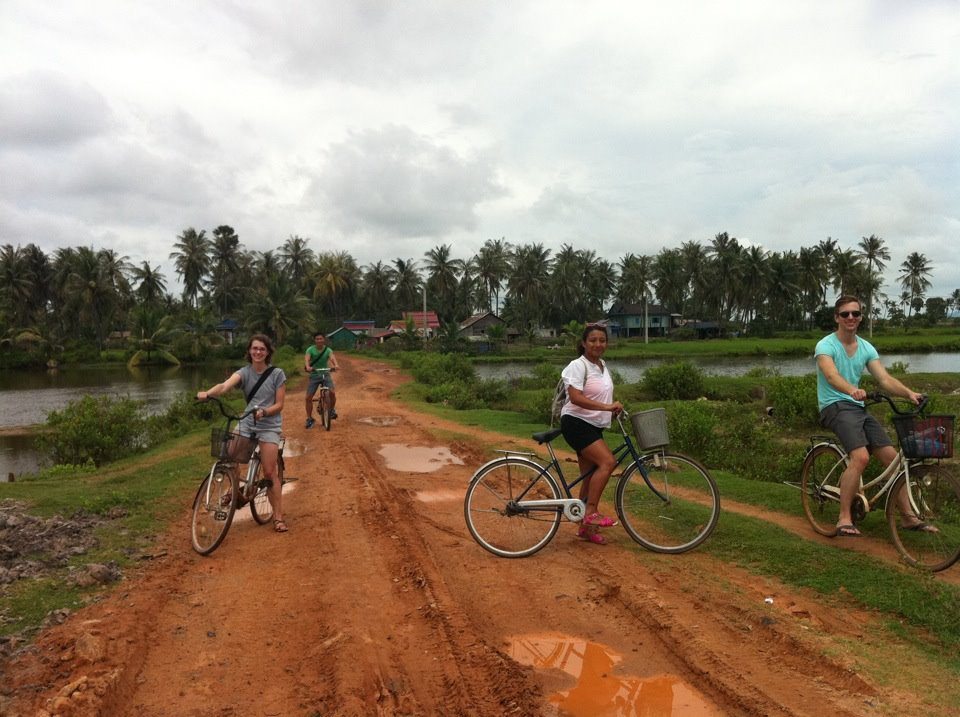 All these elements together created a scene that was calm and a beauty that was sprawling. Even through the heat, the humidity, and the physical exertion, it was all a profoundly calming experience; being alone and isolated from the city crowds and pollution exhaust, being able to breathe and take in the vivid, stretching colors with little interruption. Those images, feelings and interactions all combined to give you a complete sense of being grounded and connected there, to the land and the people and the history of the whole place. Seeing the locals and their homes and a small piece of their lives, so far removed from my own, created both a feeling of isolation and a sense of belonging I’ve never felt before, but now believe every traveler should experience.

My path took me a total of about 10 miles and left me sore, bruised, tired and dirty. Yet if given the chance to do it over again, I would take it in a minute.

The next time you ponder renting a car or buying a bus ticket, be a little more adventurous and head to the bike rentals instead. Don’t be lazy. The experience outweighs the extra effort tenfold.