A Photo Journey through Hoi An 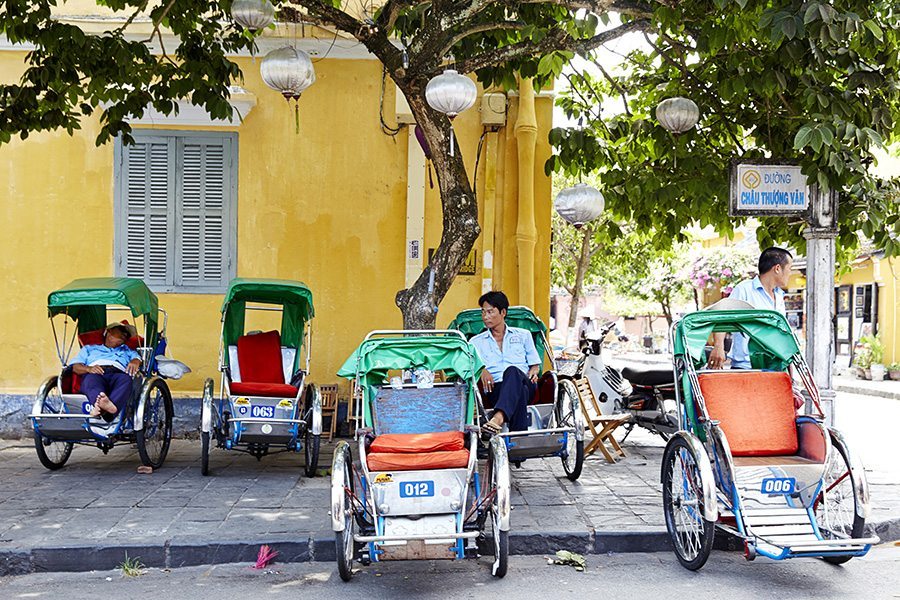 *This is a guest post by professional photographer Angela Altus. You can view more of her work here.

I had been travelling in Vietnam for just over a week – faced the wonderfully chaotic streets of Hanoi, taken the “less traveled” hiking rout through Cat Ba National Park, crawled through the mud-filled Dark Cave of Phong Nha in a bathing suit and hard hat, weathered what I thought at the time was a monsoon in a hut on Nam Cat island. And there, in South Central Vietnam off the coast of the South China Sea, I arrived at a magical town called Hoi An – a city whose name literally translates into “peaceful meeting place.” 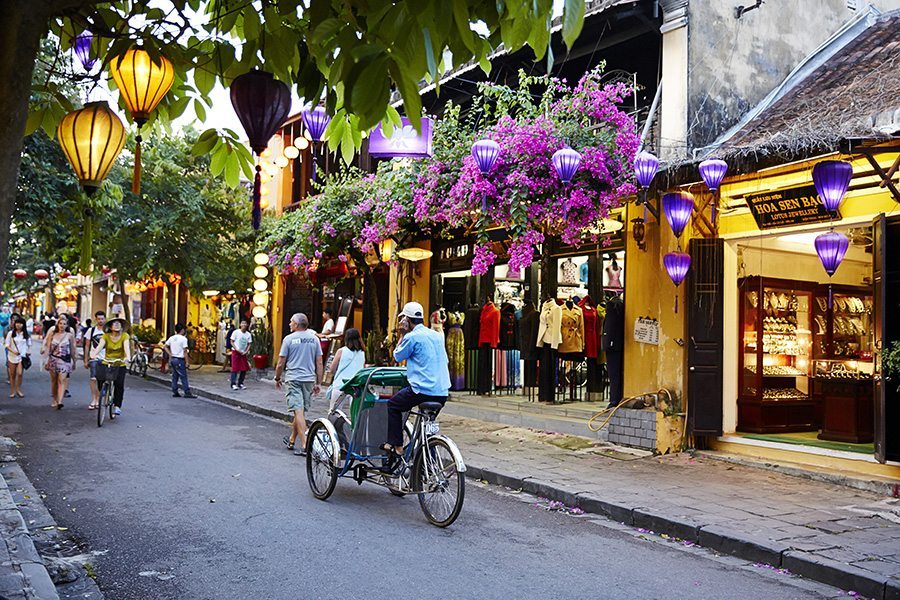 It’s a modern-day paradise in the wrapper of an ancient city. Hoi An was a trading port during the 15th through 19th centuries and is one of few places in Vietnam that have been preserved since that time. The street plans and architecture are a beautiful fusion of Japanese, Chinese and European influence that has been maintained over the years. As a visitor, your job here is to rise early and get lost in the magic… 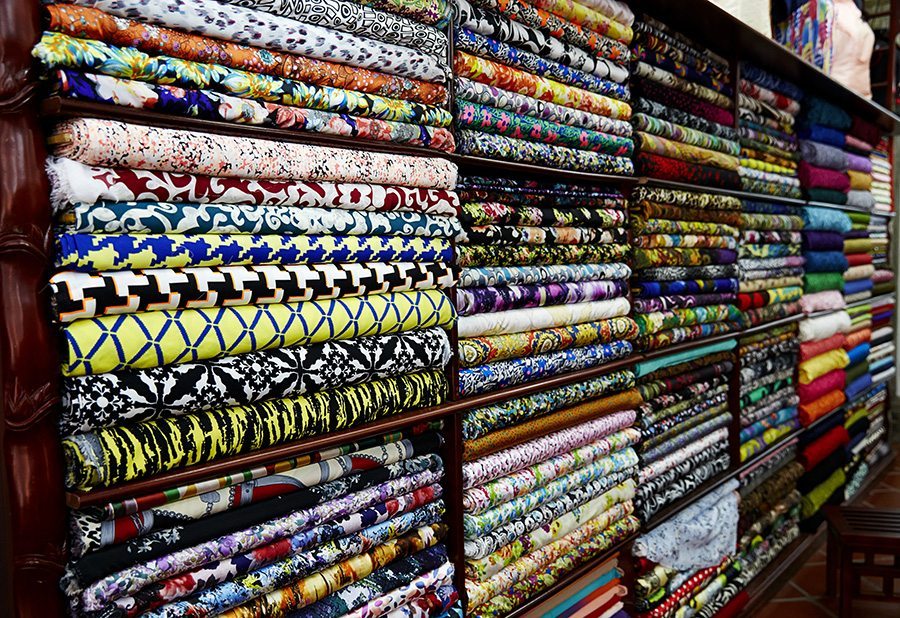 Tailoring is a long-standing industry in Hoi An. People from all over the world visit to get dresses and suits custom made by tailors whose skills have been passed down through many generations. Manikins line the storefronts decorated in bright silk ensembles. The store walls are draped with rolls of vibrant fabrics. The most popular shop in town is be be. I had the pleasure of sitting with the owner and founder, whom the shop is named after (pictured above), to learn a bit about the business. Be be had been raised by three generations of tailors. She grew up in a low-income family down the street and built this mini empire from the ground. She now has three locations scattered across Hoi An and spends time in each store daily. She is a kind and generous woman who talked about the importance of love and acceptance of everyone.

There are no cars allowed on the Old Town streets of Hoi An – which is where all of the shops, markets and restaurants are located – and the motorbike activity is kept to a minimum. This is very different than Hanoi or Ho Chi Minh City where just crossing the street can feel like the day’s accomplishment. Hoi An is very walk-able, and those who opt for a ride take a bicycle-powered Tuk Tuk. The ancient streets are lined with bright lanterns, lush trees and flowers. The city will offer you endless choices of clothing, jewelry, leather and furniture shops for a fraction of what the items cost in the west. Come to Hoi An with an empty suitcase. 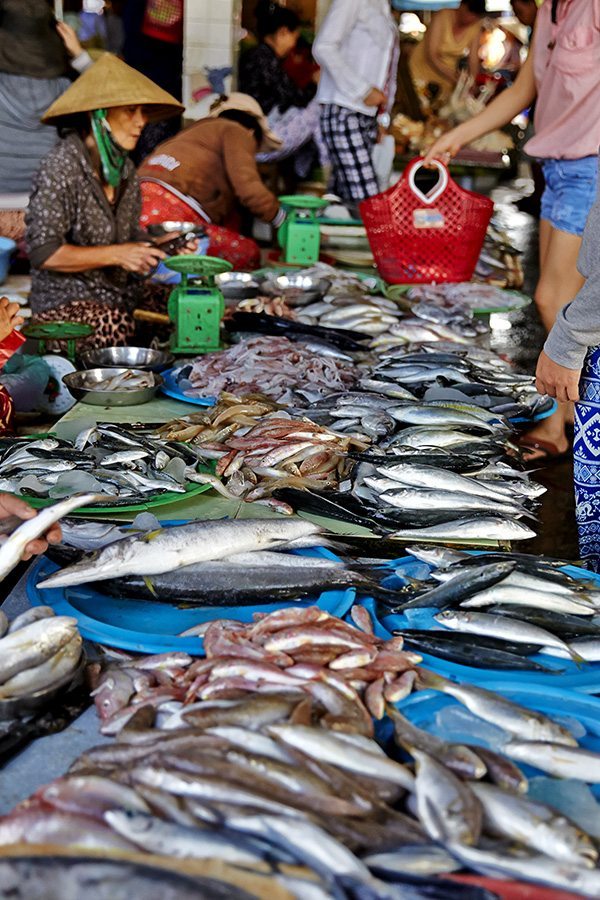 The food in Hoi An is fresh and delicious, and there are cooking classes available at many of the restaurants. While the trading port is no longer active, fishing and agriculture are still big industries for the city. The morning fish market is quite a spectacle – get there around 6AM to see the locals sort, clean and sell the fish to restaurants and other local distributors. 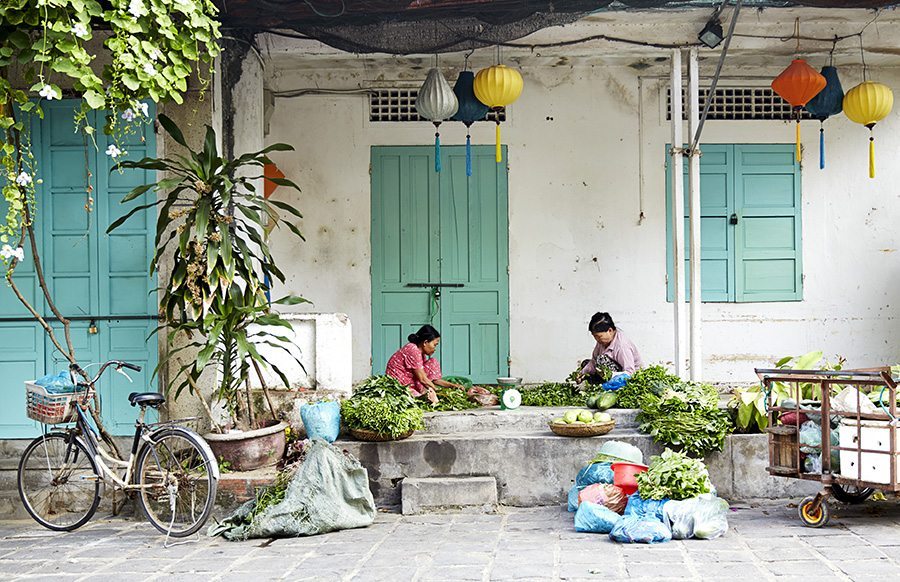 The morning routine is similar for other agricultures. These women (above) rise early to prep and organize their vegetables to sell at the market. 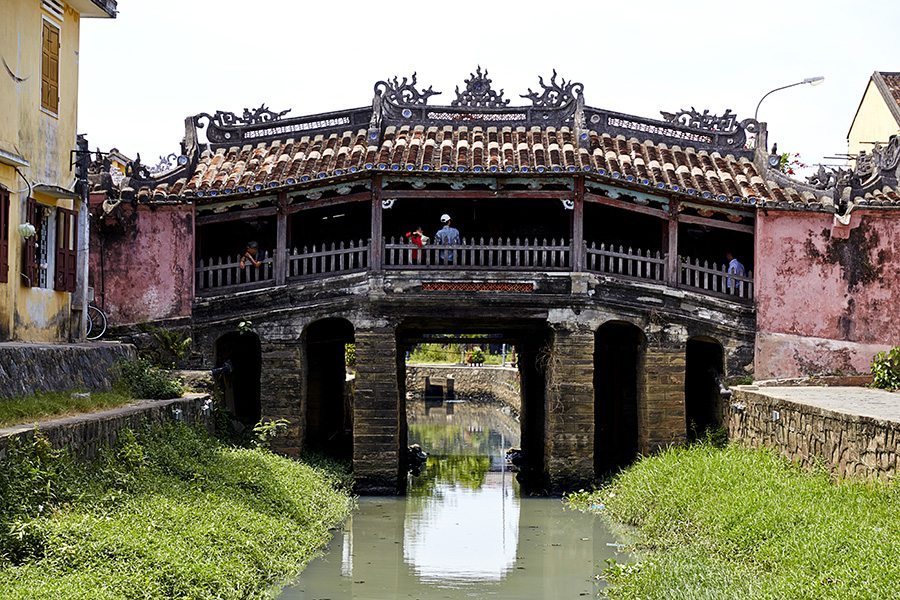 Japanese merchants first constructed the beautiful Japanese covered bridge in the 1590s to connect them with the Chinese shopping district across the river. Today, the bridge is emblematic of Hoi An. It’s guarded by weathered statues – dogs at one end and monkeys at the other. 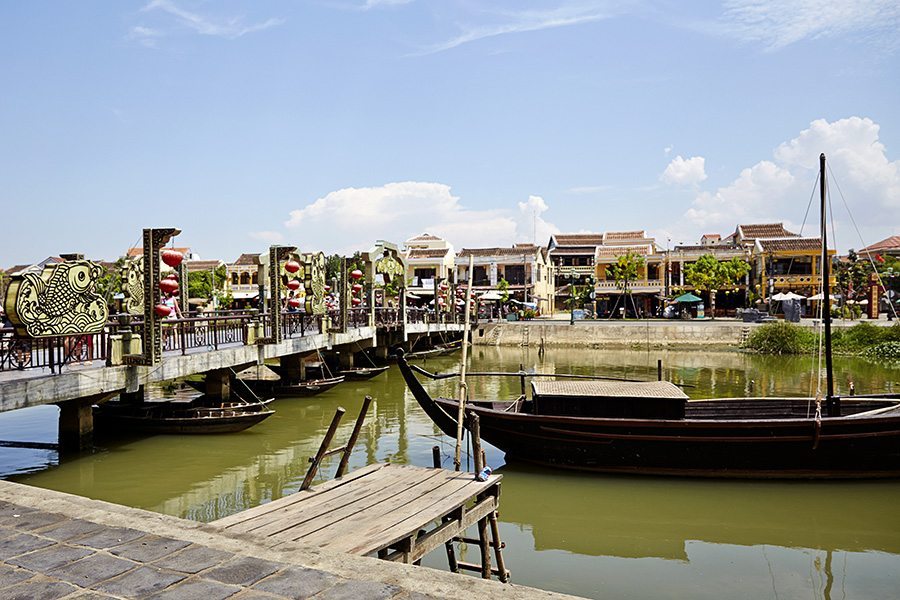 The Hoai River is a favorite meeting spot for both travelers and locals. In the evening, it’s lined with night market stands and activities, and every full moon the city releases lanterns at the river in celebration. For a small fee you can rent a boat during the day to explore the river and it’s canals with one of the locals. 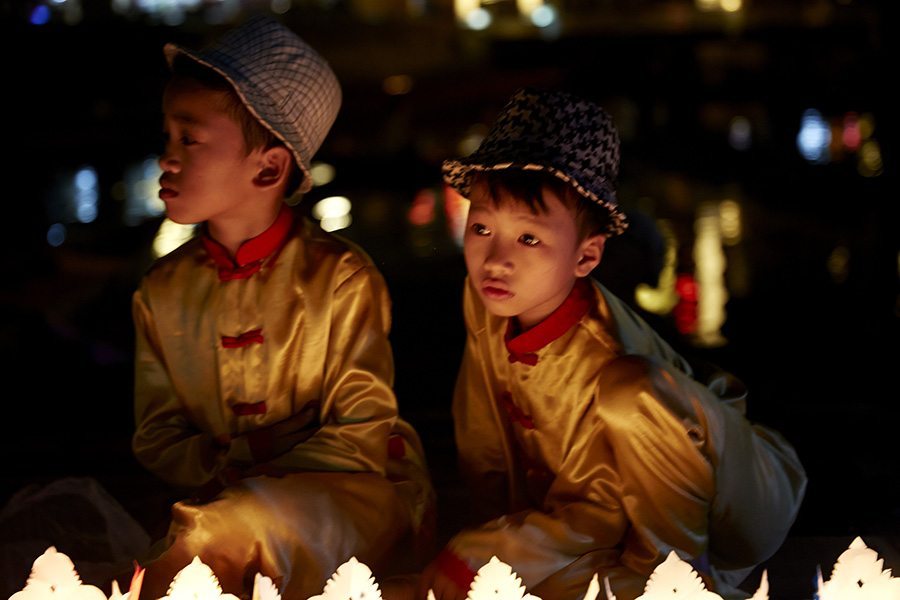 The city’s pace quickens in the evening with full restaurants, clusters of people enjoying small street shows and an illuminated night market. At night, many of the merchants dress their children in costumes to sit behind the market stalls. 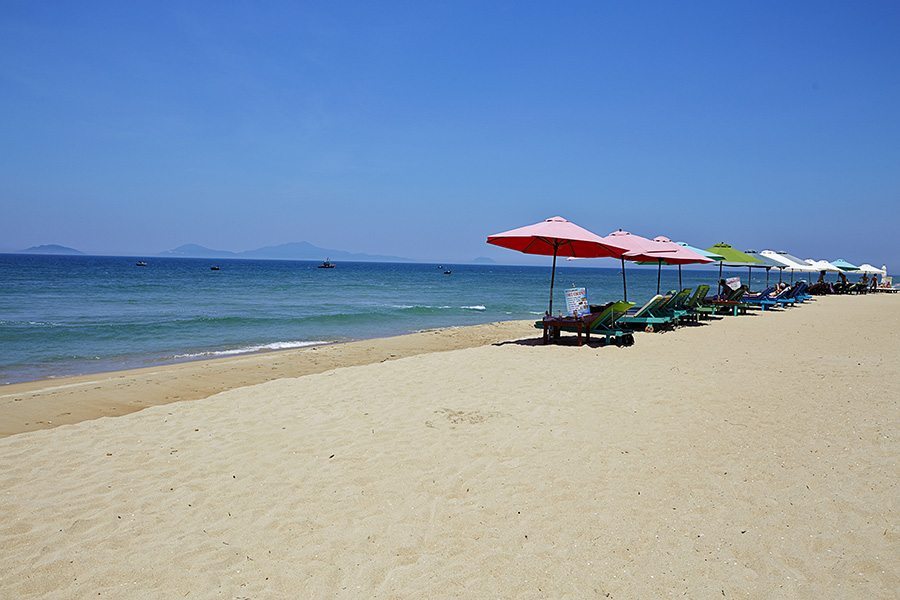 When you think you’ve seen it all, you find that the most beautiful beach in Vietnam is minutes away from Hoi An’s city center. An Bang Beach is a quiet little paradise. The aqua water is decorated with coconut shaped fishing boats, and in the distance you can see the shadows of limestone mountains. 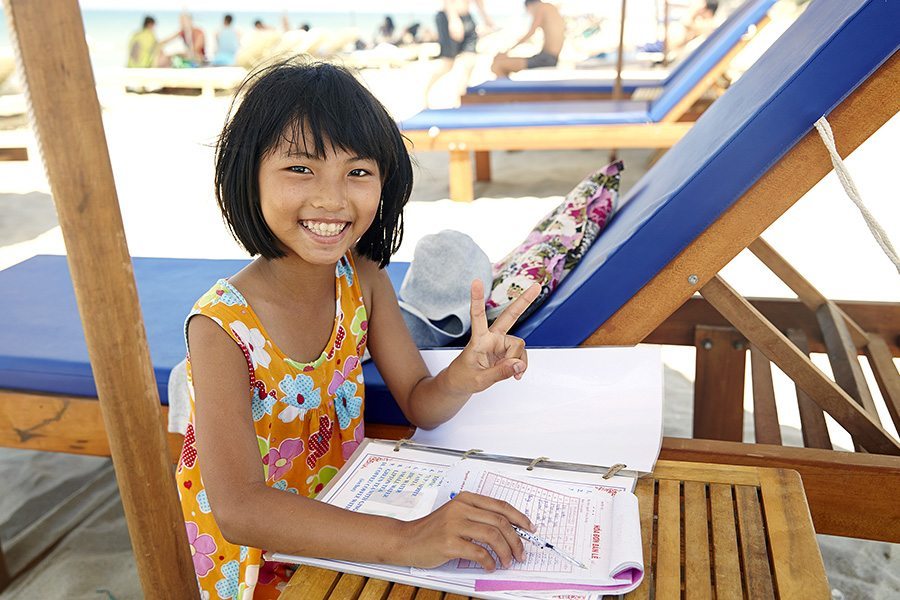 There’s a good chance this little girl will approach you with a menu and a smile. Her aunt serves beachside meals prepared in her own kitchen just off An Bang, but the girl is responsible for taking the orders and settling the bill.

Angela Altus is a photographer based in New York whose work captures the boldness necessary for commercial photography and the curiosity required for fine art and portraiture. Regardless of the project, Angela’s artistic philosophy centers around storytelling – in both extracting the narratives that already exist in her subjects and creating new, visual tales. Visit her website for more inspiring images.

Traveling solo as a woman is honestly one of the best travel experiences you will ever have. No pressure, right?! I’m an introvert, so taking a solo trip to a familiar destination, or even a new one, is something that suits my travel style. That said, you want to ensure your safety just like you do

Peekaboo, I see you!⁠ .⁠ Looking through my fe

See the line where the sky meets the sea, it calls

Last week, my ‘forever’ home burned to ashes i

Americans are pretty bad when it comes to geograph