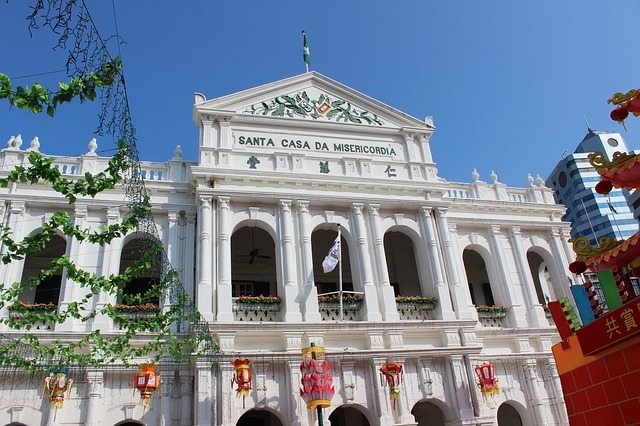 This is a guest post from Jeremy Albelda, who runs The World or Bust and Top Spot Travel.

If China has always been somewhere you’ve wanted to go, but you can’t live with the thought of not being able to check your Facebook (ya, it’s banned on Mainland China), you have two options, Hong Kong, or Macau (Taiwan sort of, but that’s an island). Both hold unique statuses as autonomous city-states that are under the protection of the PRC (People’s Republic of China).

If a modern, bustling and cosmopolitan city center is what you seek, then Hong Kong it is, but if you want to explore an Asian city with European history and flare, the chance to gamble, soak up some sun and party the night away, Macau is the place to be.

Why is Macau so cool? Well firstly, it’s not. It’s actually pretty hot with an average daily high of 77 degrees (25 Celsius) as it’s located in the far southeast of China. Why else? How about it was the first and last European colony in Asia.

The Portuguese first began poking around in the area in the early 1500’s looking to trade. After a few years, the Chinese granted them permission to set up storage sheds on the mainland for their goods secured after trading. Relations were good between the two nations and eventually, China granted the Portuguese the option to officially settle the area in 1887 in exchange for clearing out all of the pirates lurking in the surrounding coves. The rest was history and it wasn’t until 1999 that Portugal officially handed back over the “keys” to China after more than 400 years of administration in the area.

Today, Macau is an international tourist destination for both mainlanders and foreigners alike as it’s the only place you can gamble in China legally along with a slew of worthwhile attractions and activities. Read on to see five reasons why Macau makes a great place to visit. 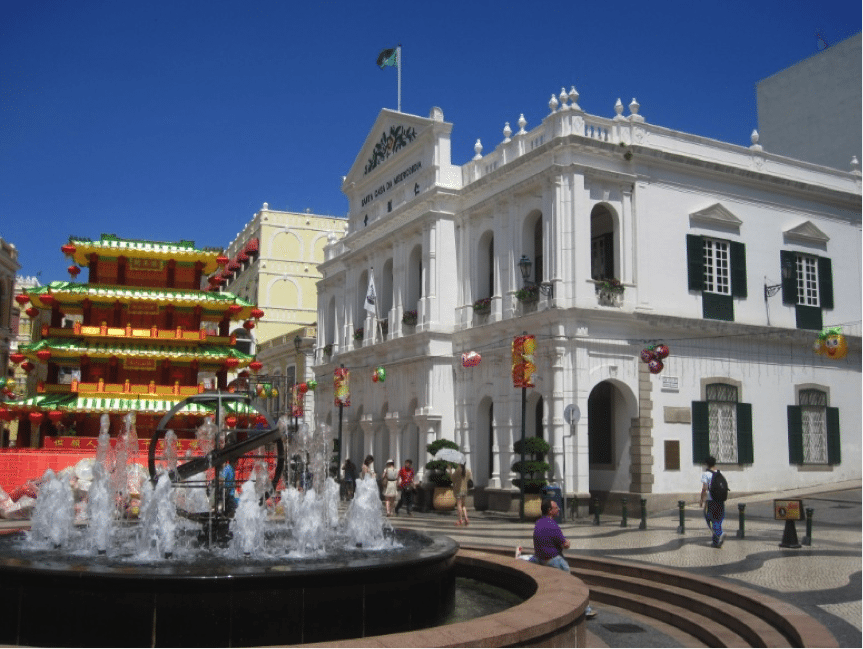 If you are a history buff, then Macau is an amazing place to explore. If you were to remove all the people and could walk the streets alone, you might very well think you were in Europe strolling down a winding road in Lisbon. The city center is home to a very large and well-preserved colonial center dating back to the 1500’s complete with catholic cathedrals, charming plazas and flower laden roads mixed with traditional Chinese architecture that makes for an interesting mélange of cultures not experienced anywhere else on earth..

Start on the Avenida de Almeida Ribeiro which cuts right through the middle of the Macau Peninsula until you reach the colonial, Senate Square. From there you can walk through the square and explore the many side streets with little architectural gems, quaint restaurants, both traditional and modern shopping opportunities and many other interesting sites like the ruins of St. Paul’s Cathedral, Monte Fort (amazing views of the city) and the Macau Museum. 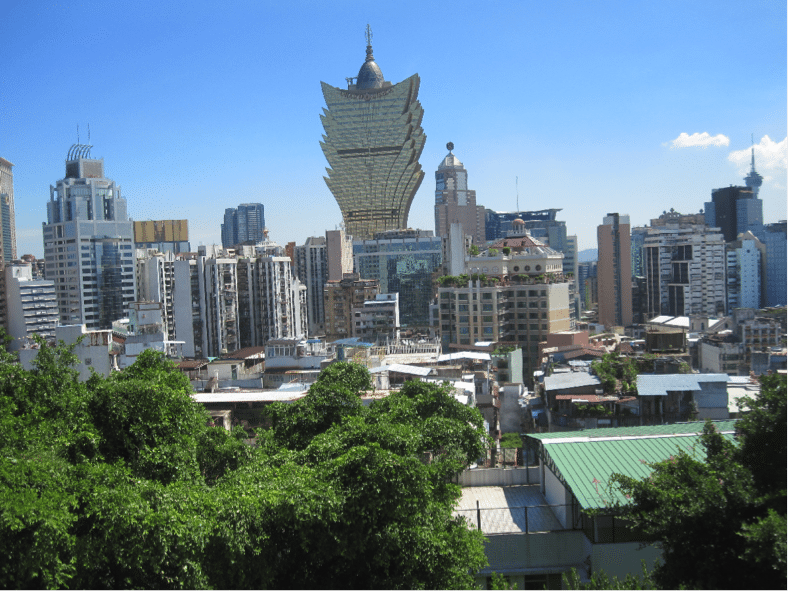 Grand Lisboa in the center

Maybe hitting the slots or tables is or isn’t your thing, but checking out some of the casinos in Macau is a fun experience. People literally go nuts while playing the various traditional casino games as well as some probably never have seen or heard of before, regardless, the Chinese like to gamble and you will see that first hand by popping into one of the many venues to win (or lose) a little hard-earned cash

One of the most impressive hotels/casinos both inside and out is the Grand Lisboa. The interesting design and façade is visible from almost everywhere in Macau as the tower rises to an impressive 58 stories.

Another fun gambling option in Macau is heading to the grey hound racetrack, The Candirome. It’s the only one in Asia, and you can find it on the Avenida General Castelo Branco. The dogs hit speeds over 60 km/h and races are held on Monday, Thursday, Friday, and the weekend, starting at  7:45 pm and ending when 16 races are completed. 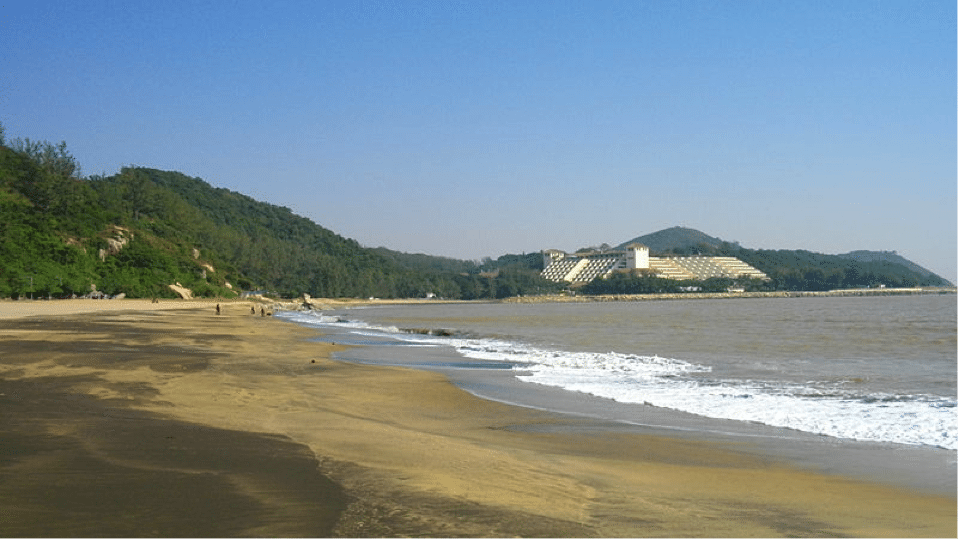 Another reason Macau is a popular touristic destination is for the chance to work on that tan. Macau’s beaches are located on the southernmost island of Coloane (just a few miles south of the Macau Peninsula). Here you can enjoy a breath of fresh air, go for hike on one of the trails, take a dip and of course, enjoy a little sun.

The two beaches are Cheoc Van and Hac Sa and are very popular with both locals and tourists alike. If you want a little more peace and tranquility, avoid visiting during the weekend. 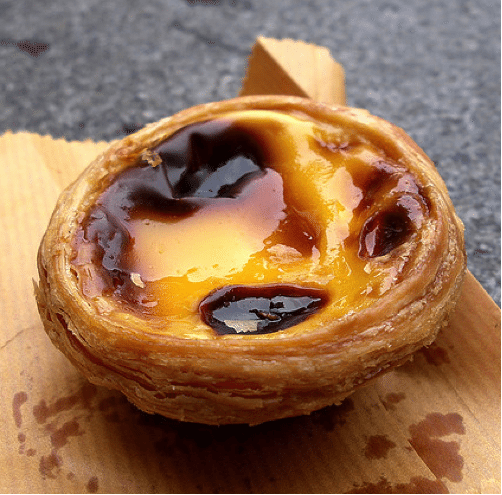 Macanese food is very unique as it has drawn from many influences and the locals are proud of its mixed Portuguese/southern Chinese roots. Another differentiating characteristic of Macanese cuisine is that it is usually baked, grilled or roasted rather than fried which is more typical of traditional Chinese food.

Some of the dishes you shouldn’t miss are Galinha a Portuguessa (Portuguese chicken) Bacalhau  (codfish)  and Macanese Chili Shrimps. You will most definitely see many street vendors selling Pastéis de nata which are sweet egg tart pastries that make a great snack or desert. 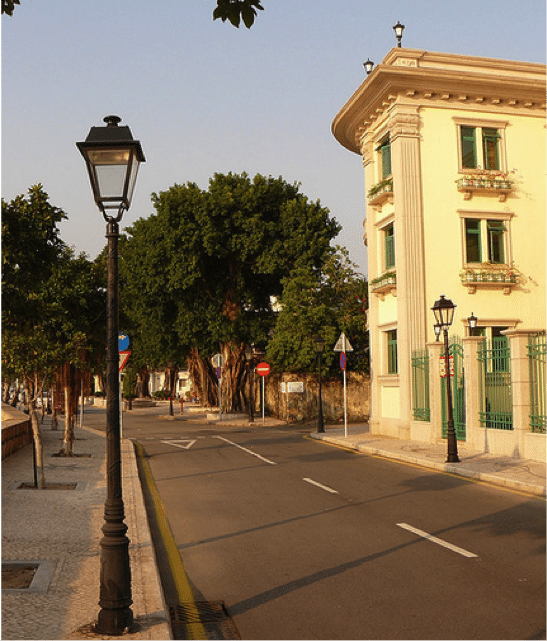 While there are plenty of public busses and taxis around, the quickest (and most fun) way to explore Macau is by scooter. While it’s not recommended to ride on the busy roads if you have no experience, there are plenty of places to putt along without fear in the peninsula, as well as across the bridges to the more isolated southern islands with plenty of scenic routes through the woods, hills, past century old temples, cathedrals and smiling kids who will certainly give a cheer if you honk your horn while riding past. The main scooter rental company is called Macau Scooter Hire and they are located at Rua da Alfandega 22.

As you can see, Macau offers a wealth of activities to enjoy for a few days on your next South East Asian adventure. It’s easily accessible via both Macau and Hong Kong International Airports as well as by boat and ferry from around the region.

This is a guest post from Jeremy Albelda, who runs two travel sites, The World or Bust.com and Top Spot Travel.com where he chronicles is travels around the world as well as shares tips to make traveling more accessible for everyone to enjoy.